This Land Belongs to You & Me

Ann Arbor, 1911 -1913
While in Ann Arbor, Han Liang lived at 637 S. Thayer Street and 110 S. Ingalls Street – addresses that no longer exist yet still conjure up images of some kind of rooming house, with perhaps a landlord or landlady who would have been one of his first introductions to US life. Tuition for out-of-state students was $55 for engineering and $40 for humanities, plus a $2 fee for use of the library.

With a monthly stipend of $64 for food and lodging, Tsinghua scholars appear to have been amply provided for – Han Liang (and Han Ho who would also come to the US) supposedly sent money home to their mother. Yet other records suggest that the stipend did not go far and, moreover, that payments from the Chinese authorities were often delayed or never arrived.

Though older by a couple years than the average freshman, Han Liang and his fellow Chinese students clearly faced far greater challenges than the average American student away from home for the first time. In trying to imagine Han Liang's life in the US, it’s impossible to ignore the broader backdrop of American attitudes towards Chinese. The Chinese Exclusion Act had been in force since 1882, disallowing immigration by Chinese skilled or unskilled workers. The impetus for the bill was concern for American jobs, as well as distaste for the Chinatowns of mainly male residents that had formed as an earlier wave of laborers had come to work in gold mines and on railway lines. Somewhat surprisingly, James Angell, Michigan’s former president who had been responsible for the University’s welcome of Chinese students, turns out to have also been one of the architects of the Exclusion Act. He is credited with achieving compromise that made the Act less punitive than it might have been. ​
The local papers had a field day with headlines like "U. of M. Co-Ed. Weds Chinese – News of Secret Wedding Startles Ann Arbor", “A Concrete Reason for the Race Prejudice at Ann Arbor” and “American Girls Marries Chinaman…Friends Peeved”. Social pressure forced the Frankings to withdraw from the university. Legislation that applied only to women meant that Mae Franking lost her US citizenship. Mae’s own parents were supportive of her marriage, but this appears to have been a minority view. In 1910, Qing officials had formally forbidden Chinese students from marrying while abroad.
We can only guess if Han Liang shrugged off this incident or any snubs he may have received as the inevitable gap between people of widely differing cultural backgrounds. In later life, he was known to admire the educational opportunities that American society offered and had extended to him. With so much of his college career still ahead of him, perhaps he was simply relieved not to be tied down by marriage. More than a few of his peers were awkwardly caught between past and future, with arranged brides back home who generally had bound feet, little learning and little possibility of keeping up with their husbands’ international lives.

The end of Han Liang's life-changing first year in the US was marked by the university’s celebration of its own milestone: its 75th anniversary. Perhaps this occasion resonated, and he envisioned a day in the 1980s when Tsinghua Imperial College would be as well-established as the University of Michigan. But probably of greater significance to him was that summer’s Mid-Western Conference of the Chinese Students’ Alliance. This annual conference would have been an important reunion for Chinese students spending long years away from their home country. Since the conference was hosted that year at Michigan, it seems unlikely that Han Liang would have missed the ten-day event. It drew 150 Chinese students from America's western and southern colleges.
​
At least in outline, these conferences were all-American affairs of the period. There were sporting and oratory contests, drama and stunt performances, songs and cheers circulated in advance, religious and other speakers, elections and parades. In 1912, lanterns and other decorations lent a Chinese flavor to the gathering. That year’s bazaar selling Asian items even attracted business from local residents – the same Ann Arbor townspeople who in a couple months’ time would be passing judgment on the Franking marriage.

​Perhaps what distinguished the 1912 conference most was that the students celebrated the recent establishment of China’s republic by singing its new anthem, "Song to the Auspicious卿雲歌  Cloud" 《卿雲歌》(Qing Yun Ge), " and raising its new flag. The Chinese header for this page is a line from the song: "This land no longer belongs to one man" (非一人之天下 fei yi ren zhi tianxia). Interestingly, while it was typical at these meetings for students to gather under banners by province, English served as the official conference language specifically to sidestep traditional divisions of region and dialect. 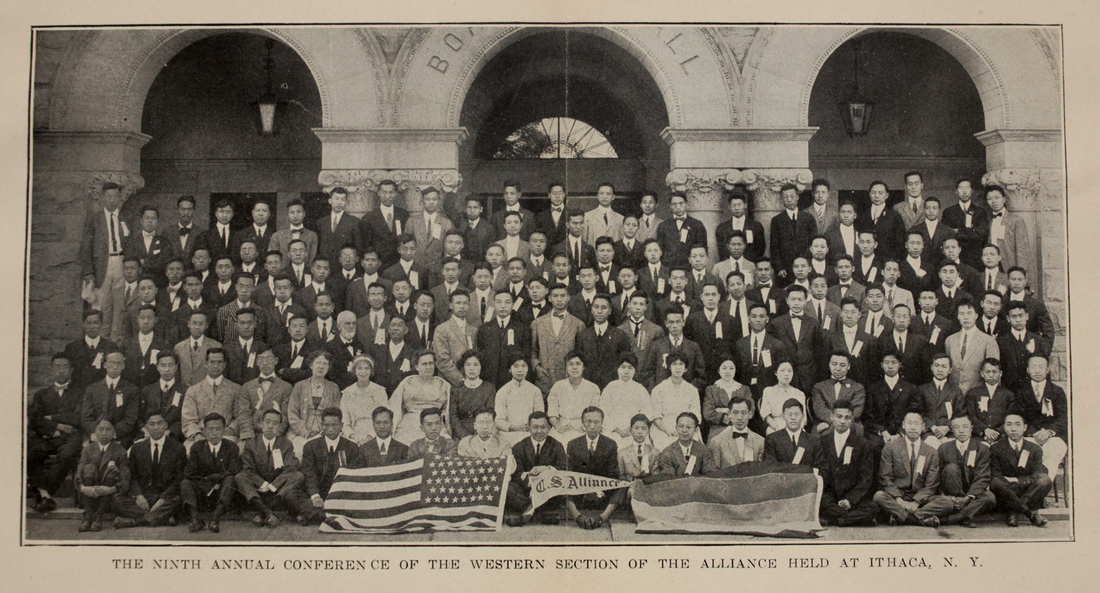 The 1914 Conference held at Cornell (The Chinese Students' Monthly)
Yearbooks show that in Han Liang’s second year, with no more imperial court to notice whether he chose a useful course of study, he transferred from the Department of Engineering to the less practical Department of Literature, Arts and Sciences. On both lists, his name appears as “Hang Liong Huang”, one of several creative spellings used during his years in the US.
SOURCES