1942-1948
A noteworthy feature of Huang family life was that the siblings maintained Cantonese as their home language. The children recall that their parents spoke a mixture of broken Cantonese and Shanghainese, although their mother spoke better Cantonese than their father.

​        The children also had nicknames, which came from different dialects:  May was ”Neui Neui” (lit. "Girl" or "Daughter" in Cantonese, but with a tender overtone more like "Sweetie"), Peter “Lou Lou” ("Piggy“ in Shanghainese), Paul “Yi Yi” (from the second character of his name, which was similar in all the dialects), Helen “Mei Mei” ("Little Sister” in Mandarin), Stephen “Di Di” (Little Brother,  more typically Mandarin, but also used in Cantonese with a rising tone for the second "Di"), and Philip “Bi Bi” (Cantonese slang borrowed from English for “Baby"). 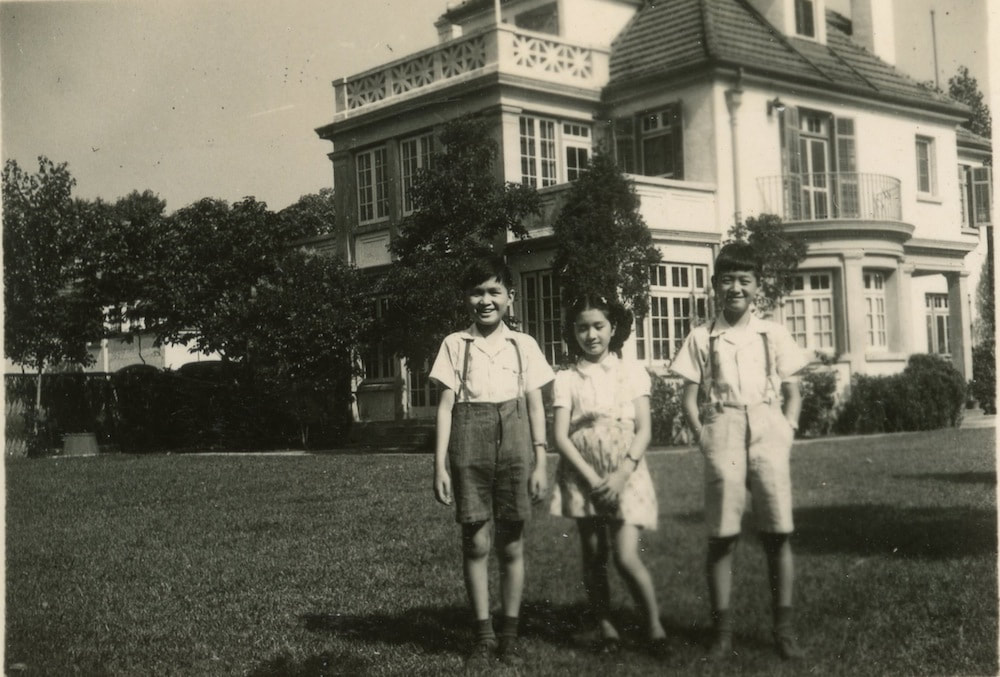 Paul, Helen and Peter. With its vast garden, it's no wonder the house was remembered as a paradise (R Yhap albums)
Living with them for a time, while attending St. John‘s University, were Michael and Teresa Wang, whom the children called  “Goh GOH” and “Jeh JEH” – "Big Brother" and "Big Sister" in Cantonese (哥哥姐姐 gege, jiejie). To avoid confusion, they called Peter and May “GOH Goh” and “JEH Jeh”, with the stress reversed to the first syllable. For some time a student from the Philippines whose name is not remembered also lived with them in the downstairs study, adding bridge to their repertoire of games.
​
The downstairs study housed classic adventure epics like Water Margin (水滸傳 Shui Hu Zhuan), a complete set of the Commercial Press’ “Wanyou Wenku” (萬有文庫) series, and other well loved volumes, such as The Count of Monte Cristo, translated from the French. There were also occasional shopping trips, when the children had carte blanche to buy all the books they wanted. 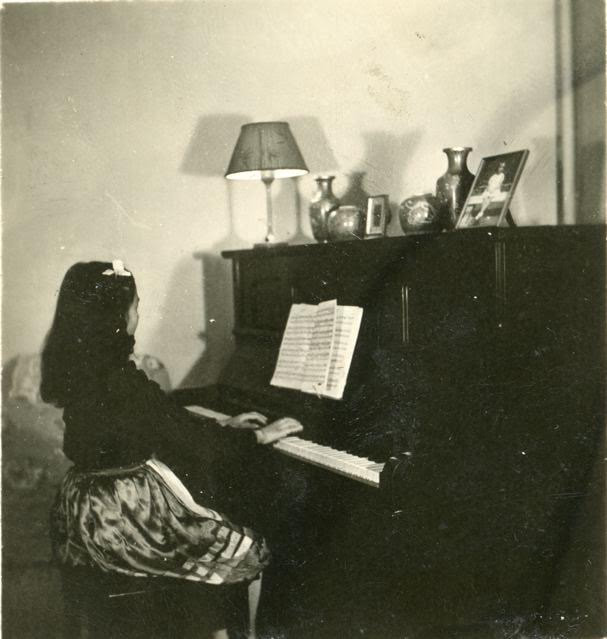 Helen at the piano, c. 1947 or 1948. This sole interior image, Helen's satin skirt, the cloisonné vases and framed photo of perhaps older sister May at a similar age raise questions about how their daily lives were kitted out and the great distance that Han Liang and Zing Wei had traveled from their own childhoods to this point (R Yhap albums)
The French Club figured highly in their lives, as all of them except Stephen were made to swim competitively under the watchful eye of their father. Although Peter and Helen were the family’s acknowledged athletes, May had a distinctive and elegant style that made her a star at synchronized swimming, and though slight, Stephen was Peter’s agile companion in ball games.

At the Club, they would enjoy Western food such as club sandwiches and french fries – which they recall were always served with mustard, never ketchup. From the Club, they might go on to the Hungjao (紅橋 Hungqiao) country houses of Sun Fo or another family surnamed 黃 (though romanized "Wong"), which owned the ABC textile company and department store, for more swimming in their lake. Years later, Peter Lieu, son of Liu Hongsheng (劉鴻生), Shanghai’s match and cement king (火柴大王 Huochai Dawang, 水泥大王 Shuini Dawang), would lament to Philip that he resented the self-confident gang of children from two families both surnamed Huang. ​ 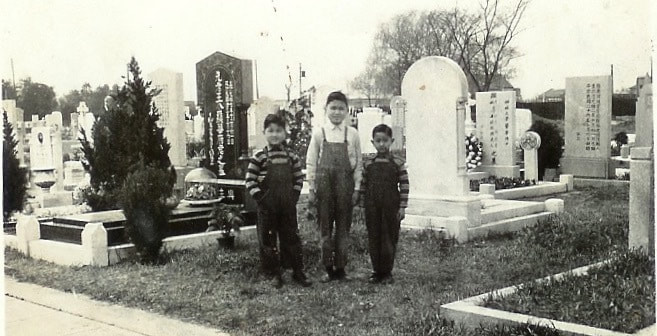 Philip, Paul and Stephen on an outing to what is most likely at Hungjao Cemetery, where Grandmother Yu Koon was buried (courtesy Philip Huang)
Other memories are of childish pitched battles, usually instigated by Peter, with homemade paper darts fired from rubber bands and sofas used as defenses. Glue for home projects was made by boiling down rice and water. There were also mud ball fights around the pond, roller skating races in the driveway, and deliveries of silkworms to play with in the spring time – a common enough plaything, but perhaps somehow connected to the maternal family trade in Wuxi.

That the children would generally prove robust, with Peter, Paul, Helen and Philip growing taller than average and far taller than their parents, is credited to their mother, the former nurse. She made sure that even in wartime they drank plenty of milk and cod liver oil. 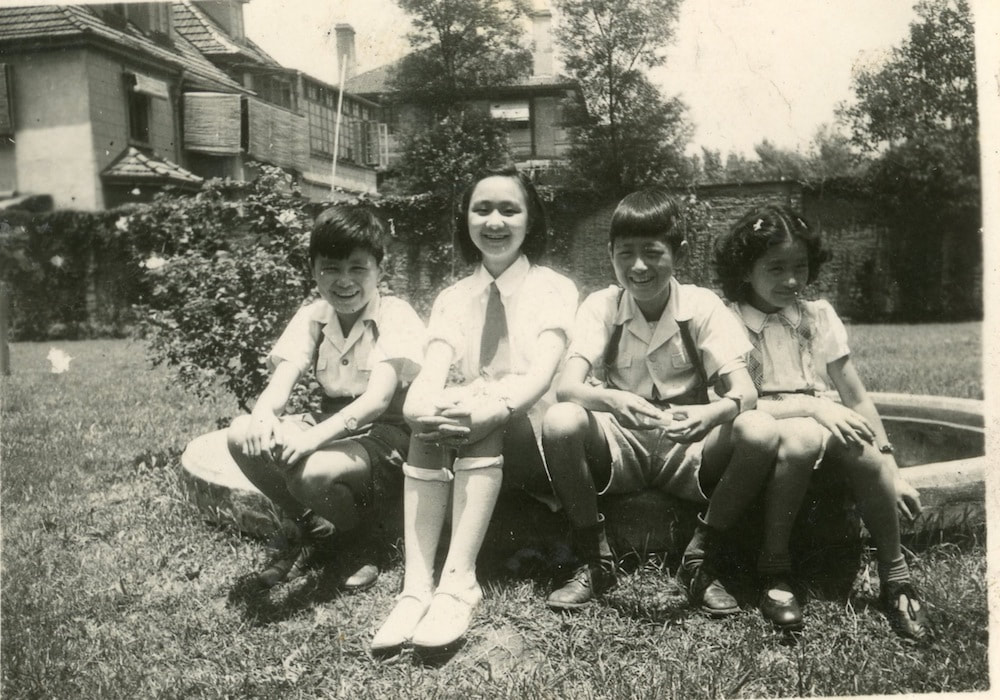 The Yuyuen Road fish pond that fueled mud ball fights – note bamboo matting hung to keep neighboring house cool; believed to be KP Chen's house (R Yhap albums)
We don't hear anything from this time period about visits with Han Ho's family, even though Lulu would have been very close in age to May, and Peter and Helen's Shanghai American School was only a block or so from Han Ho and Peggy's apartment. On the other hand, Han Liang's cousin Han Chung, still living in a lane house nearby, was a regular visitor. The children's impression was that he came for business more than social reasons.

​        Now in his early 30s, Han Chung had become a banker in his own right, first at the same China Banking Corporation where Han Liang had started his own career a quarter-century earlier (albeit then in Manila). Later Han Chung would move on to the Chiyu Bank (集友銀行Ji You Yin Hang), started in 1947 by Fukienese Tan Kah-kee, who among  other things had started Amoy University.  Han Liang and Zing Wei also found Han Chung his wife – Sun Chun – when they introduced him to one of the cousins Zing Wei had lived with after her father died.
The happy-go-lucky memories of childhood stand in sharp contrast to what was going on around them. Within just a few miles of central Shanghai, there were half a dozen Japanese internment camps where close to 7,000 British citizens, including women and children, were held in appalling conditions – although their situation can hardly compare to the misery of hundreds of millions of Chinese in every part of the country. With Japan's entry to the war, China joined the side of the western Allies, which also included Russia. It received support from the US, but arguably very little considering the role it played in keeping some half million Japanese forces occupied. After the Japanese were finally defeated in 1945, the longstanding KMT-Communist rivalry at last broke out into full-fledged civil war, although largely waged in the north of China far from Shanghai.
At home, there were also dark notes. Or at least some of the children were growing old enough to realize that their parents had a rocky relationship. Han Liang treated Zing Wei dismissively – worse than a servant. She was long-suffering. The two argued constantly. Peter and Helen both use the phrase "screamed like a fishwife" to describe their mother's unseemly outbursts. Perhaps this was a phrase they picked up from their father, who by contrast never raised his voice. Han Liang could be very charming to his peers, but he was hard on his wife and demanding of his children. None could question his authority – after all, as he would remind them, he was a PhD!
It was during this time that Zing Wei is believed to have furthered a connection with the Seventh Day Adventists in what appears to have been an on-again, off-again relationship with Christianity. While her pursuit may have been purely on her own initiative, possibly dating back dated to their time in Hong Kong, Zing Wei could also have been influenced by others in their social circle. Many in the KMT leadership, Sun Fo's wife, KP Chen were drawn to the church through its state-of-the-art hospital, the Shanghai Sanitarium. Soong May-ling went as far as employing an Adventist nurse as a traveling companion.
​
Helen believes that her mother supported the mission by putting the family's Packard at the disposal of church leaders Fordyce Detamore and Henry Meissner. This is plausible as it's known that between April and July of 1948, the church undertook a major evangelical effort in Shanghai, advertising on billboards and street cars. Before long, the church's multilingual services were drawing a thousand people at a time from a wide cross-section of Shanghai society.
​It's little wonder that Shanghai's populace sought inspiration and comfort at a time when this period of war, first against the Japanese and now between the KMT and the Communists,  was stretching into its eleventh year.
THE COLUMBIAN