1932-1933
1932 was a year that started out terribly for everyone as the Japanese trumped up excuses to heavily bomb the city. The area of the initial bombing was just north of St. Elizabeth's, across Soochow Creek. It's imagined that the workload stepped up for the nurses and other staff, when hundreds poured into St. Peter's next door seeking shelter. Battles raged in and around the city for a month, but even by early March when the bombing had moved to the Western edges of Shanghai, refugees continued to flood into the church. 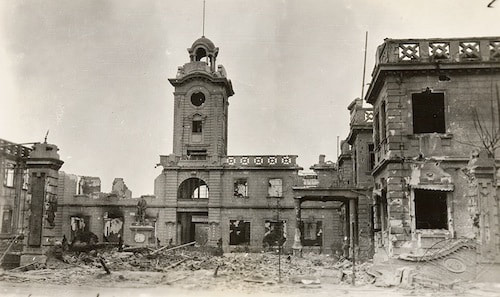 An example of bomb damage in early 1932. The National Labor University had only been set up by the Nationalist government in 1927.
In this same year, possibly earlier, a sixty-year-old woman from Fukien was checked into the hospital and became one of Zing Wei's charges. At least, it has always been assumed within the immediate family that the two became acquainted at the hospital – for a different version of the story, read here.

They couldn't speak the same language, but by Zing Wei's own account, this Mrs. Huang took a liking to her and made it clear that she wanted to introduce her to her son, who had recently divorced. Was she impressed by this young woman's competence – perhaps not unlike her own, by her caring manner, or maybe by her noticeably straight white teeth, which bespoke health and enhanced a face pretty enough to match any of the city's movie starlets?

Once Zing Wei learned about Huang Han Liang's recent post in government, would she have recalled the news about the short-lived interregnum in Chiang Kai-shek's hold on power? Would the other nurses have encouraged her to make this match, which would guarantee she need never work again? And is it true that she had a boyfriend who she had to abandon in order to agree, or that she came to the match pregnant with another man's child? Or were those the kinds of things that Shanghai gossips were bound to say after Han Liang divorced his childless wife?

​Whatever the case, by the summer of 1933, the senior Mrs. Huang was dead and buried, and Zing Wei had moved into 1055 Yuyuen Road to join Han Liang and his brother, sister-in-law and niece permanently. Han Ho and Peggy had another child on the way, and Han Liang and Zing Wei were not far behind them in expecting their first child.