TANG QUEST
In 2015, I visited the genealogy section of the Shanghai Library to try my luck and see if there might be any records relating to Zing Wei's family. I had visited China's largest library once before and to my surprise discovered that their gruff personnel were actually quite efficient and helpful. But I had not had a chance to visit the Genealogy Reading Room and had no idea what services they could offer. I entered the single room of about 30 feet by 30 feet on the second floor.

The library is a charmless, utilitarian concrete facility, but this room is human-scaled and furnished with ersatz carved dark wood furniture, as though in an effort to appeal to a clientele of older or overseas Chinese. Clashing with the too-red varnish of the tabletops are a number of black PCs. Several gray-haired souls are quietly at work. There is a single attendant about half their age and two-thirds mine.

I approach his desk armed with three proper nouns – the name of Zing Wei's father, Tang Xiqi (唐錫圻), supplied by Helen, and the names of the towns "Xizhang" (西漳) and "Shi Tang Wan" (石塘灣), mentioned in my grandmother's autobiographical letter – and explain my hopeful request. The attendant-archivist is non-committal. He spends a couple minutes at his computer, walks over to one of the public computers, calls up a document, scrolls to a page in the middle and instructs me to start looking through the pages for a familiar name, then moves off to deal with someone else.

My non-mother-tongue eyes dart randomly about the screen, overwhelmed by the page dense with characters. I am mindful of my travel companion at my side, a first-time visitor to China, who I've persuaded to give me an  hour before we start sightseeing. I glance again at my notebook, trying to hold a mental image of the eight characters that are my lifeline. How long should I give myself? "We'll just wait till the guy is free again," I tell her.

Click, scan........Click, scan........Click, scan......I've made my way through about eight pages. All of a sudden I see the characters 西張, not 西漳 as written by my grandmother, but a different second character with the same pronunciation. For Chinese learners, characters that sound the same but are written differently are a minefield and regular proof of how little we know. I flag the attendant down. Is there any chance, with only a fifty percent match, this could be the town? Again the attendant is non-committal. He opens a new document, and tells me to start looking for the characters 唐錫圻.

My spirits are buoyed, but I see this document has over a hundred pages. I cast my eyes at the clock. I have hope, but do I have time? I make a promise that I won't exceed my allotted time, but wonder if I'll really be able to pull myself away if I can't get through the hundred-plus pages in the next forty minutes. Click. Click. Click… Amazingly within about 10 minutes, I spot the characters 唐錫圻. Is it possible I've found a needle in a haystack, and in a such a short amount of time? The characters stand out against a large blank area below his entry. This means he belongs to the youngest generation included and at the time of publication had no children (in any case, as a girl, my grandmother was unlikely to have been included). I swivel around to find the attendant. Does he think this could be my great grandfather? Could someone else have the same name? The third character strikes me as somewhat unusual, but the second character is the "xi" of Wuxi and seems like a plebeian choice for someone from the area...

The attendant calmly asks me the year of Tang Xiqi's birth. I estimate twenty years before my grandmother's birth year. 1880s? Xiqi's entry says he was born in the 12th year of Guangxu's reign and the genealogy was published in the 25th year of Guangxu's reign. I have a conversion table but still need some help…1899. Tang Xiqi would have been 13 when the genealogy was published, just old enough to be included. If born in 1886, then he would have been 22 when my grandmother was born! The years jibe.

This feels like a small miracle. This genealogy was likely the last of its type, given the social revolution in the years to come, and in any case my great-grandfather died around 1921. Yet his short life managed to be documented, and this document managed to make its way into the library's collections. Perhaps Wuxi's proximity to Shanghai weighed in favor of its survival, but even so, how many genealogies must there be in China for a national archive to collect?

Fortunately, my traveling companion feels she has learned something about Chinese cultural continuity and priorities, making our sixty minutes worthwhile.
​
I take this chance to thank the unflappable young library attendant, who presented me with a certificate for counter-donating my Huang genealogy, and to thank all the many librarians who have helped this project.
A WHIFF OF LEARNING  & OF WAR
Comprising twenty-one volumes of about 140 to 150 pages each, the formally published Tang genealogy is a considerably more substantial record than the hand-copied Huang genealogy. The Jinyang Tangs (晉陽唐氏) traced their line to Jinyuan County in Shanxi Province (山西省晉源縣), to a Tang dynasty founding ancestor named Tang Jian (唐儉; courtesy name 茂約 Mao Yue), and a Ming dynasty lineal ancestor named Tang Bao (唐寶; courtesy name 維善 Wei Shan).

The sub-branch of the Tangs from Xizhang near Wuxi appear to have scholarly credentials for multiple generations, and while the genealogy only records the surnames of wives, rather than their full names (along with birth and death dates and burial information), it was clearly important to this family or in this region to also mention when a wife came from an educated family.

In short, the genealogy offers proof that, just as my grandmother delicately claimed using a conventional but seemingly accurate four-character phrase, her forbears had a whiff of learning about them.

The timing of the document also poses several points of interest and further inquiry. Published in 1899, it post-dates the 1864 end of the Taiping Civil War by thirty-five years or approximately one generation. Current estimates say that upwards of 20 to 30 million people perished in that fifteen-year conflict, making it the deadliest civil war in history, not to mention that more than half the population in affected areas, which very much included Wuxi, were displaced. The reason for widely ranging estimates is the lack of documentary evidence. Could the Tang genealogy help shed light on the vagaries of that conflict?

Like the far less detailed Huang genealogy, the Tang genealogy importantly records places of death and burial, but also considerably more personal information such as personality traits. If ages at death could be tabulated and, perhaps more significantly, burial locations pinpointed, they might shed light on the degree of disruption to such a gentry family. To what extent were lives and careers cut short and individuals displaced, and over what distances and what lengths of time? With some sixty male cousins in each of the three generations preceding Zing Wei's father, there is potentially a lot of data to work with.

Tobie Meyer-Fong's book, What Remains: Coming to Terms with Civil War in 19th Century China, focuses on the psychic trauma of the massive conflict and the subsequent decades of effort to record, recount and seek restitution for what had been suffered and lost. In keeping with her thesis, the 1899 publication of the Tang genealogy can be seen not only as a traditional means to memorialize what must have been a prominent family but as an almost desperate attempt to reassert order over what was still a devastated landscape and society. Sadly, such exertions were barely accomplished when the further unrest of the late Qing and early 20th century came along and wiped them out.
GENEALOGY REFERENCE INFORMATION
Genealogy of the Jinyang "Tangs", 21 Volumes (晉陽唐氏宗譜二十一卷 Jin Yang Tang Shi Zong Pu Er Shi Yi Juan)
Wuxi, Qing Dynasty, 25th Year of Guangxu (無錫清光緒25年 Qing Guang Xu 25 Nian) – i.e., published in 1899
Printed with wooden movable type (木活字本 mu huo zi ben)
Retrieval number 927106-27 (索取號 suo qu hao)

All pages read right to left, top to bottom.
Deciphering the Tang genealogy below is a work in progress.
FOUNDING ANCESTOR OF THE XIZHANG LINE
The following three pages trace the Tang line, starting with 27th generation Jue (珏) of the Ming dynasty, who is considered the founding ancestor of the Xizhang line because one of his sons moved to Xizhang. ​ 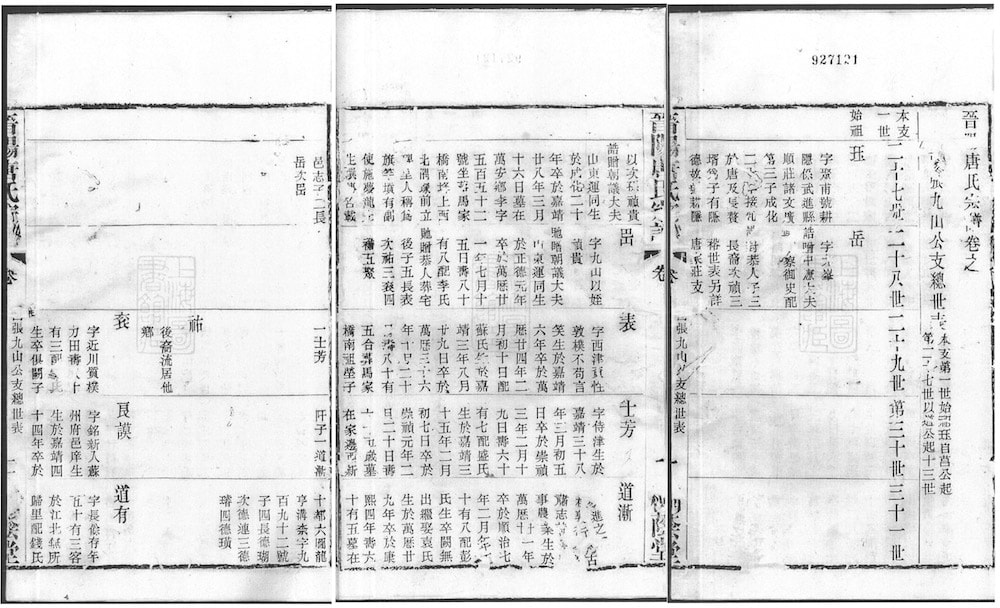 ZING WEI'S IMMEDIATE FOREBEARS
The next two pages give the details of the the four generations preceding Zing Wei's father Xiqi – i.e.,  Xiqi's father, grandfather, great-grandfather, and great-great grandfather Yutai. We wonder if Zing Wei had a chance to know her grandfather, Ruitong, who if he survivied would have been in his mid-fifties when she was born. 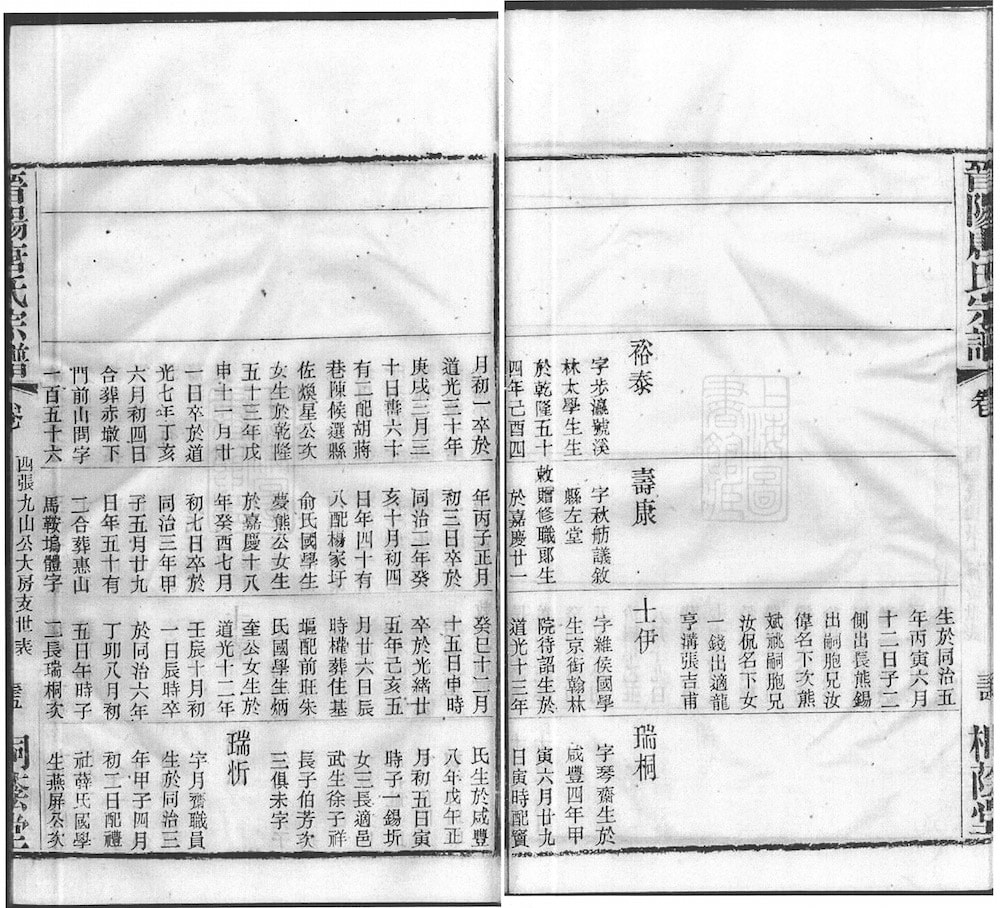 ZING WEI'S FATHER: END OF THE LINE
The following image, reading right to left, shows a brief entry for Zing Wei's father. It straddles the fold between the two pages: 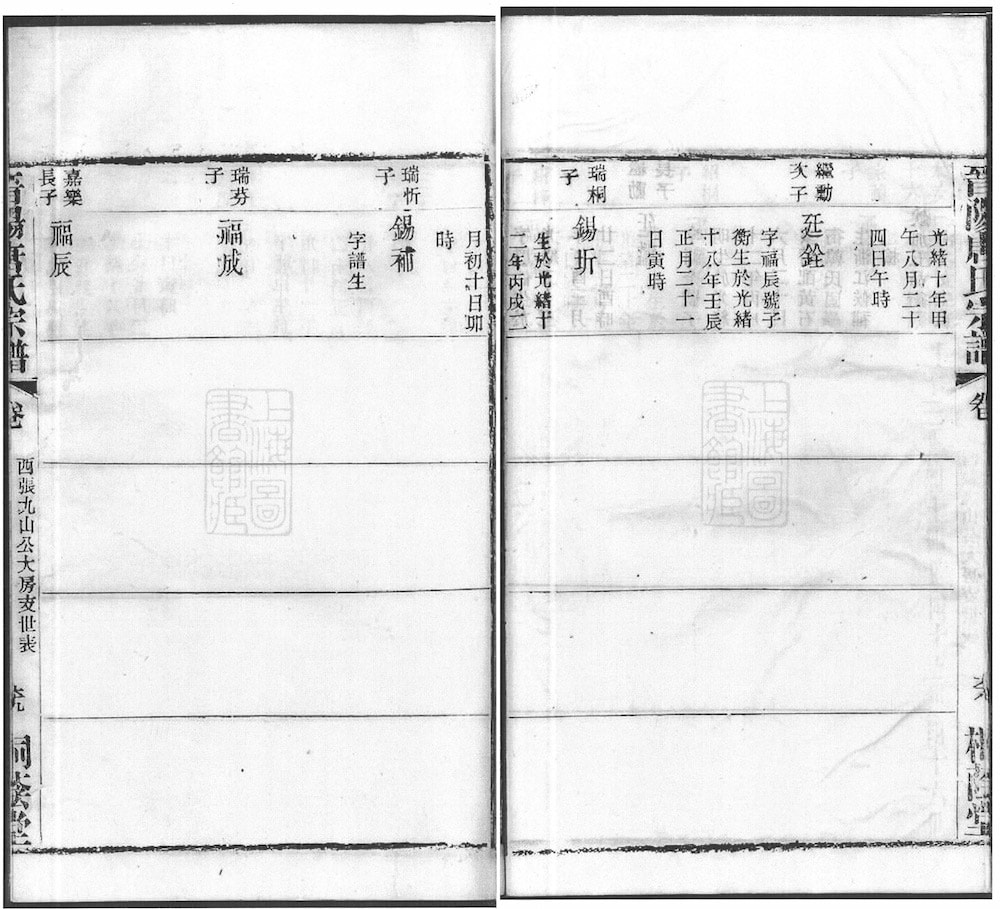 42nd generation
His generation was the youngest shown in the genealogy (at least for this branch). He would have been 13 in 1899 when the genealogy was published, almost 22 when his daughter – 43rd generation Zing Wei – ​was born in 1908, and about 35 when he died around 1921.
*ADOPTION & SUCCESSION