Shanghai, April 9 or 10, 1924
Now in his early thirties, Han Liang was a rising star on the cusp of greater things. From the mid-1920s, his thus far peripatetic life began to coalesce around Shanghai. He was about to make a match of consequence, to commission a house in a desirable neighborhood, and to settle his Fukienese family members around him.
​
According to his 1925 Princeton alumni report, Han Liang married Mo-li How (夏瑪莉 Xia Mali) on April 10, 1924. No further details are provided. But Mo-li's family was prominent, so additional information is not hard to come by.

Mo-li was about nine years younger than Han Liang, the eldest of eight daughters of the already deceased How Zoen-Fong (夏瑞芳 Xia Ruifang). Z.F. How had been the lead co-founder of the innovative and wildly successful Commercial Press. 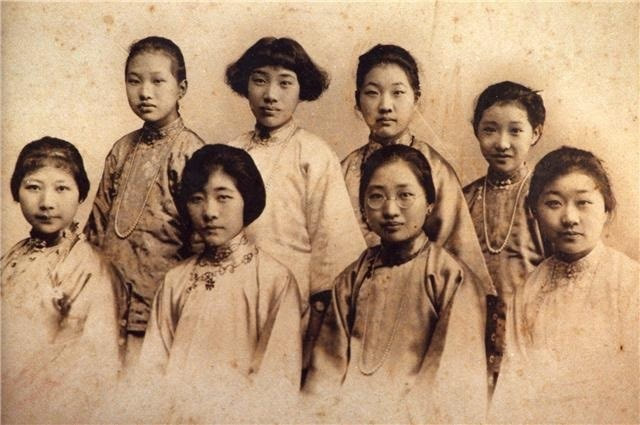 Mo-li and her seven younger sisters. She is 2nd from the left in the front row (the sisters are typically arranged in photos by birth order with odd- and even-numbered sisters on opposite sides; photo courtesy of J Suez)
An announcement in “The North China Herald" (北華捷報 Bei Hua Jie Bao) gives the wedding date as April 9, rather than April 10. More importantly, a notice in this English-language paper and the fashionable details it describes bear out that Han Liang was moving in – or into – privileged circles. The wedding was Western in format: they married in a church, the bride wore white, and a maid of honor and best man attended them.

Mo-li's English name was Mary, but though Western-educated and Christian, she more commonly went by her Chinese name. She is said to have been quiet and reserved, in contrast to the reputation of her seven sisters. Like the somewhat older Soong sisters, the Hows were educated at the Methodist-run McTyeire School for Girls (中西女塾 Zhong Xi Nu Shu).

The wedding notice describes Mo-li as a student of the Boston Conservatory. That affiliation has not been verified, but it is known that at the advanced age of twenty-two, she had at least on paper been enrolled for the 1923-24 academic year at Simmons College in Boston. Her chosen course of study was household economics, but she clearly did not see out a full year, given her marriage to Han Liang.

No photo of the Huang-How nuptials survives. But we can approximate the scene by mentally photoshopping an image from two weeks earlier, when Mo-li's brother, Bang How (夏鵬 Xia Peng,1896-1972), married Rose Ng-Quinn. On that occasion, Han Liang and Mo-li posed on either side of the bridal couple as best man and maid of honor. 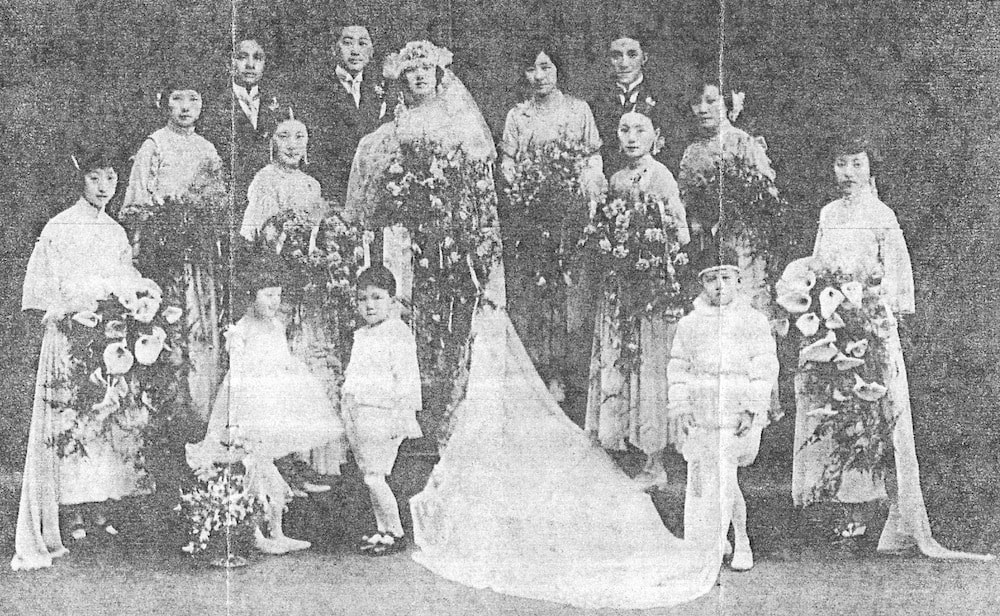 Wedding of Bang How and Rose Ng-Quinn. Han Liang and Mo-li stand on either side of the bridal couple, with #3 sister Louise How and #1 brother Sydney Ng-Quinn standing beyond them. To the right of Sydney stands Soong May-Ling. Mo-li wore jade green, while the other bridesmaids wore pastel shades (courtesy of J Suez)
Rose was from a well-off Australian-Chinese family transplanted to Hong Kong. One of her sisters had married into Hong Kong’s wealthy Wei family, meaning that upon marrying, Han Liang became not only a director of the Commercial Press, but distantly also a brother-in-law to China’s first tennis champion and future Davis Cup captain, Wing-Lock Wei (韋榮洛 Wei Rongluo), as well as to the noted husbands of the other delightful Ng-Quinn and How sisters.

Slide Han Liang and Mo-Li over into the central roles, and one is left with a reasonable facsimile of their less showy wedding. Indeed, based on the descriptions in the marriage announcements, it appears that Mo-li wore her new sister-in-law Rose’s own pearl-embroidered train and tulle veil, with a similar orange blossom wreath, had the same flower girl and page boys (Rose’s nephews), and carried an identical bouquet of white roses and maidenhair ferns.

Not surprisingly, the larger How-Ng-Quinn bridal party included one of the soon-to-be-prominent Soong siblings, May-ling. Like the Hows’ father, May Ling's father, Charlie Soong, had started out as a printer of bibles. Both couples held wedding dinners at the Great Eastern Hotel (大東旅社 Da Dong Lüshe), although Bang and Rose also held a reception in the ballroom of the Astor Hotel (禮查飯店 Li Zha Fan Dian, a phoneticization based on its original name of "Richards Hotel") – presumably to manage their numerous social obligations.
​
The Soong family was also closely affiliated with the How-Ng-Quinn wedding venue, the Young John Allen Memorial Church (景林堂 Jing Lin Tang; now 景靈堂 Jing Ling Tang; photo below). Completed just the year before, it had been largely funded by TV Soong, May-ling’s brother and Han Liang's former Columbia classmate. Bang and Rose's celebrant was the respected Dr. Francis L. H. Pott. Pott was president of St. John’s University, which Bang had attended prior to Wharton, and an early historian of Shanghai.

By contrast, Han Liang and Mo-li were married by the Anglican minister, Reverend Alfred N. Rowland, at the prettier but less vaunted Union Church (原新天安堂 Yuanxin Tian'an Tang; photo below).

If Bang did not in turn serve as Han Liang’s best man, it was because he had to give his sister away in the place of their deceased father. Instead, Han Liang’s best man was another executive of the Commercial Press in charge of publicity, named CP Ling (林振彬 Lin Zhenbin, 1896-1941). Ling’s profile suggests he was possibly a close friend, but also possibly just a suitable bridge. Like Han Liang, Ling came from Fukien, but from Foochow rather than Amoy, and had also attended the Anglo-Chinese College, Tsinghua and Columbia, but not necessarily at the same time as Han Liang. In 1926, he would leave the Press to start a groundbreaking advertising firm, earning him credit as the likely genius behind Coca-Cola’s clever Chinese name, “Ke Kou Ke Le” (可口可樂, lit. “enable the mouth to be happy”). His reputation as a creative type with a glitzy lifestyle suggests that, at least in the years to come, he was more likely to associate with other Shanghai “Mad Men” than with a straight-laced banker like Han Liang.
Together, the two closely timed weddings offered a well orchestrated display of alliance. Yet in every detail, the simpler Huang-How nuptials suggest an efficiently achieved propriety, piggybacked on to the How-Ng-Quinn society match. To a certain extent, these must have been the shadings appropriate to the lesser status of Han Liang and Mo-li as social newcomer and younger sister. But these were perhaps also the practicalities of a marriage planned on short notice.

In November 1923, by which time Mo-li would have been well into the Simmons academic year, Han Liang is known to have been in Hong Kong wining and dining the managing editor of the Commercial Press. Zhang Yuanji (張元濟) was a critical figure in the Press's continued innovation after Z. F. How's death.

Zhang was on a mission to set up a new printing facility. Han Liang was himself only recently based in Hong Kong, but as detailed in Zhang's diary, he laid out the red carpet to introduce Zhang to members of the Amoy and wider Fukien business community. Zhang logged several entries about meals and meetings hosted by Han Liang, referring to him as son-in-law of the family (although possibly that reference is a later editor's notation to explain Han Liang's identity). ​

At what point before or after this intensive cultivation did an understanding develop between Han Liang and the How family – that is, between Han Liang and Mo-li’s mother, Bau Tsui Nyoh (鮑翠玉 Bao Cuiyu), and Bang? Two of Mrs. How's brothers had co-founded the Press with her husband, Z.F. How. Following his death, it's assumed that seventeen-year-old Bang became pater familias for his eight sisters. 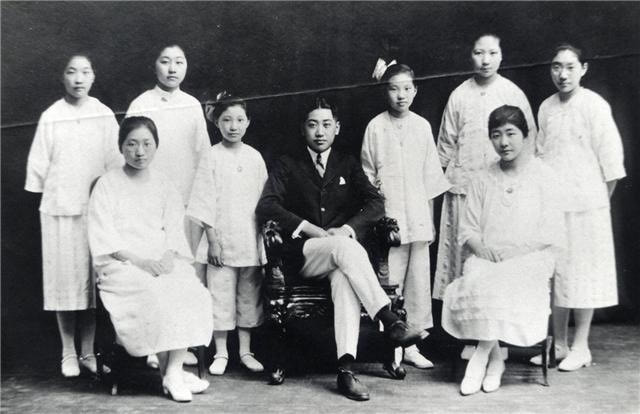 An earlier photo of the nine How siblings. Mo-li is seated on the right. #2 sister Ruth, seated on the left, is usually identifiable by her glasses (courtesy of J Suez)
Perhaps Han Liang and Bang had a particular friendship. It seems more likely that they were simply running in broadly the same social circles – circles that could be quite mobile, as suggested by Rose's moves from Australia to Hong Kong to Shanghai, and the information in the "Herald" that Mo-li returned to Hong Kong with Han Liang.

​        Any number of people could have introduced Han Liang to the Hows and vouched for his eligibility. To begin with, there was Han Liang's best man, CP Ling; though five years Han Liang's junior, they might have known each other back in Foochow at Anglo-Chinese College. Rose's brother Sydney Ng-Quinn overlapped with Han Liang at Columbia for at least a year, living in the same dormitory, Hartley Hall. There was also KP Chen of the Shanghai Commercial Bank; he and Bang were fellow Wharton alumni, albeit with an age gap of sixteen years. Still another connection was Han Liang’s former classmate and Manila employer Albino Sycip of the China Banking Corporation; his wife Helen Vonglin Bau (鮑鳳林 Bao Fenglin) was a cousin of Mo-li’s mother.

Neither Mo-li nor Han Liang was young by the standard of the day – not to mention Mo-li's many younger sisters who would need to be married off after her. If both sides seemed in a bit of a rush to make this promising match, would anyone have questioned their sense of urgency?
HUANG-HOW HEADLINES
SOURCES