c. 1920-1926
"Tsinghua in the North, Tsunghua in the South", "the most Chinese of schools" – these are some of the phrases that have been used to describe the reputation and standing of the school in Suzhou which Zing Wei was fortunate enough to attend. Is it possible, that on some level, Zing Wei's girls' school warranted comparison with Han Liang's vaunted tertiary institution? The second epithet suggests that pride lay not only in the quality of the education, but specifically in the fact that it was achieved without foreign backing. Han Liang's former Columbia classmate, educator Tao Xingzhi, apparently commented at some point: "Tsunghua is one of the very best schools – it was a pioneer in the area of women's education."

For how long Zing Wei attended, whether she went before or after her parents’ deaths, or how she could have met the tuition as an orphan remain mysteries. The school’s records are patchy for the years before 1928 when it moved to its present-day site and by which time Zing Wei would have left. Yet it is beyond doubt that somewhere along the line Zing Wei received a solid education: she would in future often serve as her husband’s secretary and scribe, and her surviving letters attest to a fluent calligraphic hand and polished turn of phrase. ​

Zing Wei had most likely graduated a couple years before this 1928 photo, titled: “Student Body of Suzhou Tsunghua Girls’ School, Primary and Secondary Sections, Photographed in November of the 17th Year of the Republic, New Campus, Next to the West Garden’s Rui Yun Feng Rockery”.
​
Critical to the school’s prestige was educator, sometime government official, and early supporter of the Kuomintang Ts’ai Yüan-p’ei (蔡元培 Cai Yuanpei, 1868-1940). Prior to Tsunghua, Ts'ai had been involved in the founding of the “Patriotic School for Girls” in Shanghai. By the time Zing Wei attended Tsunghua, he was chancellor of Peking University.

Before becoming radicalized, Ts’ai had achieved the highest rank of “jinshi” (進士) in the old examination system and joined the rarefied Hanlin Academy, to which Zing Wei's great-grandfather claimed a link. It was there that Ts'ai became a beloved pupil of Wang’s husband, a scholar in the Qing court, and it was through this connection that he agreed to become a trustee of Tsunghua. Even more importantly, Ts'ai became a regular lecturer at Tsunghua attracting many of the best minds of the day to do likewise. ​
The Tsunghua faculty also included Wang’s sisters Wang Jizhao (王季昭), a Tsinghua and Pomona graduate, and Wang Jichang (王季常), a Tsinghua graduate. Their nieces, Ho I-Djen (何怡貞 He Yizhen) and He Zehui (何澤慧), daughters of another scholarly sister, Wang Jishan (王季山), were both among Tsunghua’s first graduates and went on to become accomplished physicists. Other distinguished alumnae would include playwright Yang Jiang (楊絳), who would head a Shanghai branch of Tsunghua during the war years, and Lu Cui, who would be a student leader at Tsinghua in the 1930s. Fei Hsiao-Tung (費孝通 Fei Xiaotong), father of the fields of sociology and anthropology in China and a seminal influence on Zing Wei’s eventual youngest child Philip, was one of several male students who attended Tsunghua.

Relatively speaking, if Lake Tai were a clock, Wuxi and Suzhou would be located at 12 and 3 o'clock, respectively.  As the crow flies, from Zing Wei's village, the distance was about 50 miles. By the early 1920s, it's probable that Zing Wei would have made most of the trip by rail, with perhaps the last three miles from the rail station by boat along Suzhou's canals. The train station was outside the city walls on the north side (D1 on map below), while Tsunghua was within the city walls in its southeast corner, along a canal called Yen Ya Chien (嚴衙前 Yan Ya Qian; J8 on map below). One assumes that whether or not she attended with any of her cousins, detailed arrangements were made for her initial trip, as well as for return trips to her uncle's home at least once a year at Chinese New Year. 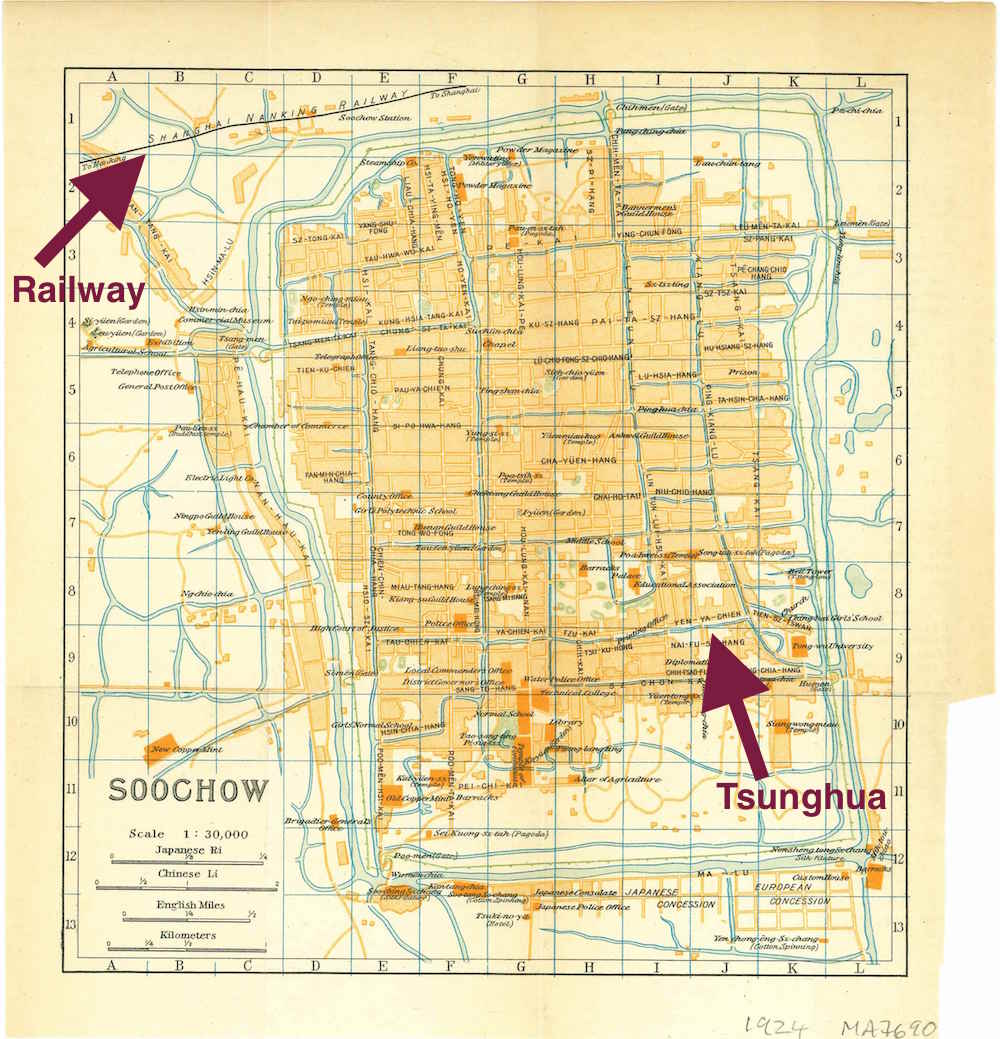 1924 Imperial Japanese Railway Map of Suzhou or Soochow (author's own)
Dependent on extended relations with limited resources, Zing Wei's situation was hardly enviable, but there is some relief in knowing that the school to which she was sent was not a cruel death trap like that experienced by the fictional Jane Eyre or her real-life creator. ​ In 1928, the school moved to its current, extensive site which formerly housed the Suzhou imperial looms. The school lives on as Suzhou No. 10 High School (江蘇省蘇州第十中學). ​