From 1926
As Han Liang settled down in Shanghai, he also began to move a good number of his relatives north from Amoy.

According to the family genealogy, Han Liang and Han Ho had six first cousins born to their Uncle Been-Sa and his successive three wives – one girl and seven boys. By the numbering system that ranked male cousins by birth order, they held seniority in their generation, ranking #2 and #3 after #1 Han Teng (漢騰), Been-Sa's firstborn who had died as a baby. (It’s possible that there may have been other cousins who died too young to be recorded, especially if they were female.)

Been-Sa himself died in 1920 in his mid-fifties. In 1926, Han Liang arranged for Been-Sa’s widow, Lin Yiguan (林益官, b. 1888) to move to Shanghai along with her two sons. She was Been-Sa's third wife, technically Han Liang's and Han Ho's aunt, though only their elder by a few years. Her sons were Han Yang (漢陽, b. 1902) and Han Chung (漢鐘, b. 1915), or cousins #5 and #7 by the generational ranking system. Han Yang was in his early twenties and a recent graduate of Amoy’s Jimei Schools. Han Liang put him to work at the Ho Hong Kong Bank. Han Chung was much younger, only about eleven, and his mother’s pet. At first he was a poor student, but eventually he proved diligent enough that Han Liang also set him up in a banking career. They would in time be known to Han Ho’s children as “5th Uncle” (五叔, “Wu Shu”) and “7th Uncle” (七叔, “Qi Shu”).
Photos from the time show Han Yang as a dapper, sociable young man with an easy and urbane manner. One of his sons notes that he enjoyed cultivated hobbies such as opera-singing. Clever with his hands, Han Yang took pleasure in crafting his own opera costume headgear, as well as elaborate kites. The photos give a strong impression of a young man with a carefree upbringing, suggesting either that his father Been-Sa had greater means than previously believed, or possibly that Han Liang's success was so relatively phenomenal that it would have been unseemly for him not to have done something for his uncle’s family. If indeed his own parents had been at odds with Been-Sa, maybe that ill will had been patched up over time. ​​
​        A slightly different angle is that perhaps Han Liang actively sought to smooth things over with a view to developing some clan feeling and cultivating a network that he could call his own. After all, tapping one’s relatives to serve as business colleagues was the normal Chinese approach to ensure trustworthy associates. If this were the case, then over time, Han Liang would find the results of his relocation efforts decidedly mixed.
Young Han Chung (#7) would eventually become a model lieutenant, but not for many years to come. The dapper Han Yang (#5) started off in promising fashion: within a few years of his arrival he married a young woman from Ningpo (寧波 Ningbo), Xu Huiying (徐慧英). They soon had three sons, Songling (松齡, b. 1929), Heling (鸖齡, b. 1931) and Junling (駿齡, b. 1935). They also had daughter Meiling, but she unfortunately died as a toddler (美齡, 1933-1936). They all lived on Dong Hua Fang (東華坊), a lane at 983 Yuyuen Road not far from Han Liang and Mo-li at 1055. Theirs was a classic Shanghai lane house (弄堂 longtang, or里弄 lilong). It would have been an attached house of two  or three stories, opening on to a small, high-walled walled courtyard, with a small rear courtyard and upper level terrace as well.
But then in 1933, Han Yang developed tuberculosis. Han Liang arranged for him to be sent to a sanatorium near Shanghai (葉家肺病醫療院 Ye Jia Feibing Yiliao Yuan). Han Yang's family moved into a separate house also on the sanatorium grounds. His case was severe, and most of his ward mates died. Drastic surgery was proposed to remove a large section of a lung. In his hour of need, Han Yang converted to Christianity and vowed to devote himself to the church if he survived. Survive he did, and so he left the world of banking to become a Pentecostal pastor, changing his name to Huang Ruiqing (黃瑞卿). ​
At some point, Han Liang also brought over his #4 cousin Han Zhen (漢珍, b. 1892). Han Zhen was an older half-brother to Han Yang and Han Chung by their father's second wife, and is believed to have been set up in some kind of trading business by Han Liang. Han Zhen eventually moved on to Singapore, and in turn sent his own son Shenpei (祳培, b. 1934) back to Shanghai to be raised by Han Yang and Han Chung’s families until he could rejoin his father in Singapore as a teenager. 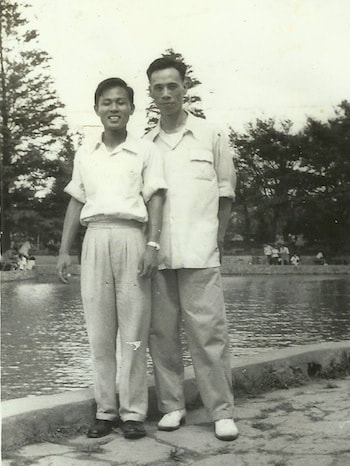 Han Chung with his nephew Shenpei. Han Chung became a banker in his own right and also helped his cousin Han Liang with other business matters (courtesy of H Huang)
A small mystery remains about what became of Cousin #6 – a full brother of Han Yang and Han Chung born in the thirteen-year gap between them. Piecing together the clues, Han Yang’s son Heling recalls that he called Han Chung “Little Younger Uncle” (小叔, “Xiao Shu”), signifying that not only was Han Chung his father’s younger brother, but that his father also had an older younger brother. Both Heling and Mary have dim recollections of someone referred to as "6th Uncle" (六叔, Liu Shu), but someone who was only talked about in whispered tones – who did something so terrible that he was sent away and struck out of the family genealogy so that no one even remembers his name. It's believed that he may have worked at Ho Hong Bank, and it's believed that his misdeeds may have involved outsized gambling debts.
Heling also recalls his grandmother Lin Yiguan, mother of Han Yang and Han Chung. He remembers her neat attire and scrupulous personal hygiene, which included regular washing of her bound feet and bound foot wrappings. Photos of her suggest how Han Liang's own mother, Yu Koon, might have looked in terms of style of dress – although she was twenty years older and closer in age to Been-Sa's daughter Huang Tang, his oldest surviving child, whose marriage was mentioned early in this narrative.
By the time Han Liang’s own children were old enough to know about any of these relatives, they would be aware of only faithful lieutenant Han Chung, who would drop in occasionally from his family's lane house off of Yuyuen Road to speak to their father about business matters.
LIFE IN SHANGHAI'S LANES