1948-1953
By 1948 or possibly even earlier, the children could no longer be oblivious to the war around them. Tensions were rising everywhere, and Helen who now slept in the enclosed porch off of her parents' bedroom could often hear them talking late into the night. Zing Wei seemed to be the one more anxiously piecing together bits of information and advocating for the family to flee. Han Liang was said to be still looking to a future in Shanghai, even planning a new real estate investment with Sun Fo.
In this climate, Han Liang went into hiding for a number of months. He had allegedly been told upon by a Ho Hong Bank employee. With a warrant out for his arrest, Zing Wei at one point traveled to Nanking by train, endeavoring to arrange his exemption.

One night, there was a commotion in the house as a stash of forbidden gold bars was brought out of a quasi-cellar. Zing Wei gathered the children together and showed them a package wrapped in newspaper. Inside were 10-ounce gold bars called “goldfish”, piled into a block the size of about two loaves of bread. She pressed a fingernail into one of the ingots to show them how soft the pure gold was. Ironically, Zing Wei took this evidence of guilt to a relevant official and used it to secure the chance for Han Liang to go free.
​
The trip took over a week. The ship docked in Kaohsiung (高雄 Gaoxiong) in Taiwan for about five days, during which time they could not get off the boat. They finally arrived in Hong Kong on or close to Christmas.

In Hong Kong, it was perhaps a year until they settled into a “permanent” home. May and possibly another child lived with their father at the Peninsula Hotel. The others stayed with their mother at the Harbour View Hotel, which ran as a kind of boarding house with all meals included. It was located on the corner of Mody and Chatham Roads, looking out over the eastern side of the Kowloon peninsula, a short walk from the Peninsula Hotel.

In 1949, China fell to the Communists led by Mao Zedong (毛澤東) and the People's Republic of China was established. Chiang Kai-shek fled from Chungking to Taiwan, moving the Republic of China to the island that three centuries before had been a safe haven for Fukien's Koxinga when the Qing overthrew the Ming. With Chiang went many of those affiliated with the KMT who would once have been in the same social set as the Huangs. For some years to come, Hong Kong would see repeated waves of refugees. There were no doubt happy reunions with long lost friends, much talk of other friends lost forever, and big decisions to make about their lives ahead. Yet the children's memories are, again, mainly the preoccupations of childhood. Moreover, though born in close succession, at this moment the children spanned a wide range of ages and needs and were developing entirely different interests and social circles.
​        Eventually the family moved into their own quarters at 4 Tak Shing Street (德成街 De Cheng Jie). In a row of a several-story buildings, theirs was the first house on the left. They lived on the second floor and had perhaps three amahs, including Ah Lai, the senior housekeeper, and Ah Kwan, who doubled as the cook. 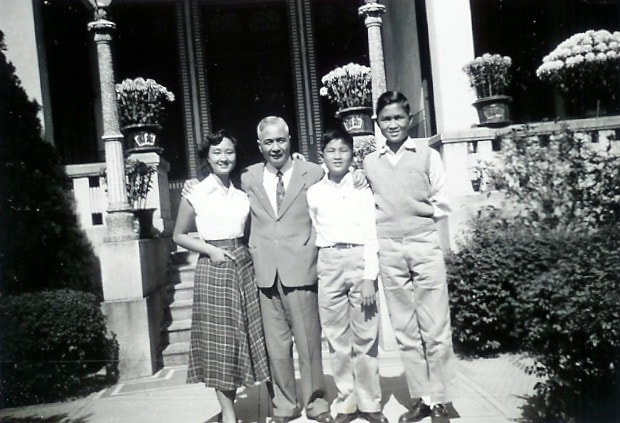 May, Baba, Philip and Paul outside of #4 Tak Shing Street (courtesy Philip Huang)
A memorable event was a party for May, aged 16, in the Tak Shing Street living room in May 1950. She is seated in the center of the second row. In the front row, Paul is third from the left and Helen fourth from the right. It's not known why Peter was not in the photo. Stephen and Philip were presumably too young to take part. ​May was certainly the social butterfly of the family, but it still seems surprising that such a crowd would have gathered for her birthday. 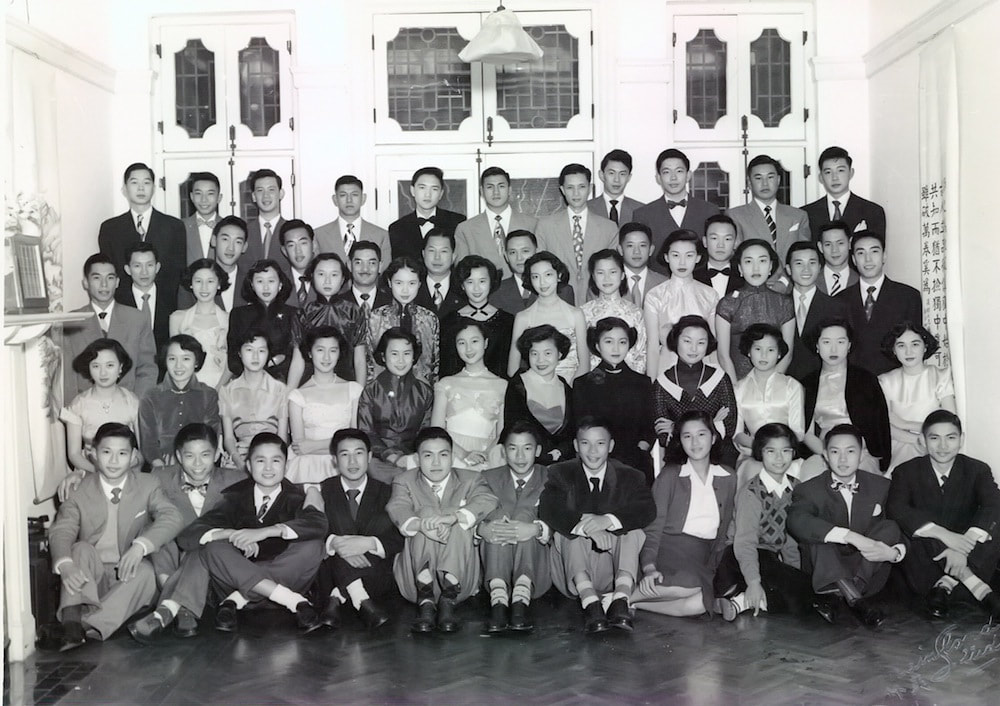 (Peter Huang albums)
During this time, around 1950 or1951, Han Liang was diagnosed as having had a heart attack. He was prescribed a daily diet of pig's heart, which their mother dutifully cooked each day, and bed rest for a year. During his confinement, Helen became their father's English-language secretary. Helen had learned shorthand through a group of new friends who were all followers of the Seventh Day Adventists. She recalls that most of the correspondence was with the Sycip family in Manila or the Irving Trust in New York.