Dedication, 1918
Among the contacts that Han Liang is known to have made in the US, one who remains somewhat mysterious is Mrs. Francis de Lacy Hyde (1869-1959), a wealthy widow who associated with the Rockefellers and was active in a number of social causes.

Han Liang gratefully dedicated his doctoral dissertation to her with this inscription:

To CAROLYN KNOWLAND HYDE who has been a mother to me during my residence in America and whose love and sympathy for China have endeared her to many of my countrymen. ​

A widow after her husband’s suicide in 1910, Mrs. Hyde sat on several educational boards and was the only woman on the Greater New York Planning Board. The poet WB Yeats met the Hydes in 1903 and declared Mrs. Hyde to be “a very cultivated woman”.

From 1918 to 1926, Mrs. Hyde was a member of the YWCA’s National Board. While in this role, Mrs. Hyde along with Mr. and Mrs. John D. Rockefeller, Jr. and others helped to host a delegation of silk workers from China, which included three silk reelers from “Wusih” (無錫 Wuxi). Both the YWCA in the US and in Shanghai took an interest in the working conditions of the women. It was hoped that upon their return to China they could urge their fellow workers to produce a higher quality product in order to raise their wages. (Coincidentally, Han Liang’s future wife would be a woman from Wuxi whose family was involved in the silk industry.)

In all likelihood, it was Han Liang’s and Mrs. Hyde’s respective ties to the YMCA and YWCA that brought them in contact.
​What sort of acquaintance would have been sufficient to prompt Han Liang to recognize Mrs. Hyde in his PhD thesis? Would Mrs. Hyde have ever invited Han Liang and his classmates to her estate “Hydewood Hall” in Plainfield, New Jersey? The Hyde family had made its fortune in the western Pennsylvania oil rush and the house was described by one visitor as “palatial”. Perhaps the well-positioned Mrs. Hyde was able to open doors for the students before they returned to China.
In any case, by 1918, what mattered more than the resources or sympathies that a Mrs. Hyde or John D. Rockefeller could muster on China’s behalf was what the country's own upper crust could do. With PhD in hand, Han Liang was poised to become part of that upper crust. ​ 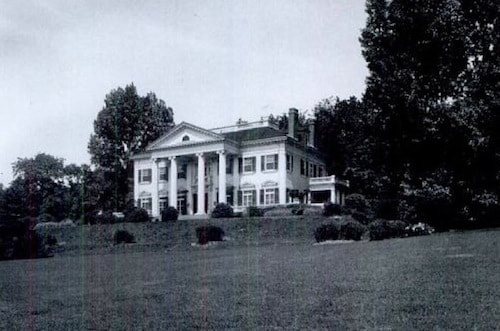 Was Han Liang ever invited to the palatial Hydewood Hall? It featured one of America's first private golf courses.