From 1929
Although Han Ho and his family seemed well ensconced in Amoy with Grandmother Yu Koon, around 1929 Han Liang also brought them to Shanghai.

Was it Han Liang's idea or Han Ho's? Or Grandmother Yu Koon's? She was said to be a proponent of the traditional ideal that all the generations should live under one roof. That seems plausible. But perhaps she also had other motives.

Han Liang would surely have had concerns that such a move was not going to be easy, and indeed, it seems that Grandmother Yu Koon found little to her liking upon arriving in Shanghai – not Mo-li’s clothes, not her Western ways, not her less than frugal management of the household, and least of all her childless state. Mo-li endeavored to please, but underlining their differences was the simple fact that the two did not share a common language. Unlike the family's other daughter-in-law, Peggy, who was from Amoy albeit raised in England and Denmark, Mo-li did not speak Hokkien.
Matters only grew worse when soon after the move, Han Ho’s son Moses, who was about five years old, fell ill and died. Meningitis was the possible cause. The little stream that ran near the Yuyuen Road house and an inattentive amah were blamed. Whatever the case, by the time a doctor was called, it was too late. One can only imagine the further pall that must have fallen over the household when the family's only male heir died. 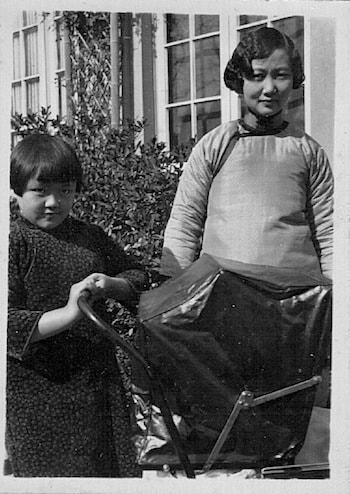 Mary and her mother Peggy (courtesy of M Gee)
The same conservative attitudes that made Grandmother Yu Koon disapprove of Mo-li now led to Moses' sister, Mary, being practically held hostage at home. Mary was the same age as Mo-li’s niece Julie – daughter of Mo-li's brother Bang – but Grandmother Yu Koon disallowed for Mary everything that was normal for Julie – short dresses, socks, music and dancing lessons, etc. She refused to see her granddaughter trained up as a “sing-song girl" or vulgar entertainer. Despite her fierce efforts to educate her sons, Grandmother Yu Koon still believed that a girl need only know how to write her name and a simple letter.

Mo-li offered some diversion for Mary. She was kind and might invite Mary to her room to play or see her glamorous wardrobe, but the possibility of a seizure was an ever-present specter.