Back to: Extended Family
OLDEST PHOTOGRAPHED RELATIVE: HUANG TANG
At the start of this narrative, we met Han Liang's Uncle Been-sa, who had recently married off his teenage daughter,  Huang Tang (黃堂). Born in 1888, not only was Huang Tang Han Liang's only female cousin, she was also the earliest Huang relative for whom a photo survives.

​In the group photo below, she appears on the far right wearing a cap, and it looks like she has bound feet. Pictured with her are her daughter, Zhou Yu (周玉), her grandson Xu Fukun (許福坤 ), his wife, and their three children. We guess that Zhou Yu was born in the first few years of the 20th century, and that this photo is from the 1970s. Huang Tang lived until 1977. The solo photo shows Zhou Yu around 1983.
​        The oldest of Huang Tang's three great-grandchildren is named Xu Tianzai (許添在). I met him and his wife in Xiamen in 2012. They have a daughter in her 20s who teaches elementary school math.  Although he and I were close in age, he is one generation younger than me. 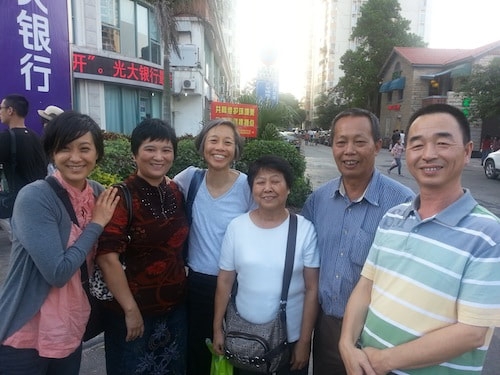 Xu Tianzai on the far right, with Heather, his wife, me, and another couple (own photo)
LIN YIGUAN, WIDOW OF HUANG MIANYI 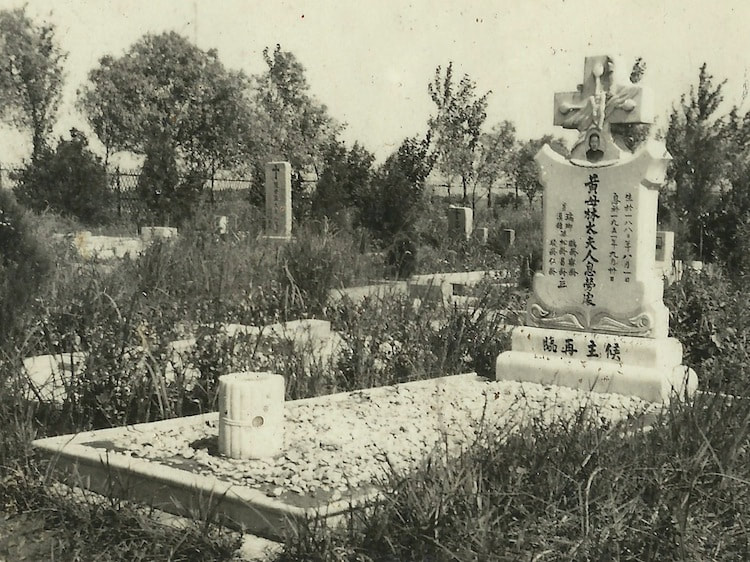 HAN YANG, AKA RUIQING THE PASTOR
​Han Yang was the urbane young man who once worked for Han Liang at the Ho Hong Bank. After recovering from TB, he changed his name to Ruiqing and became a Pentecostal Christian and pastor. During the Cultural Revolution, he was assigned relatively light work duties in the Shanghai area, which he took in stride with what appears to have been his characteristically forgiving nature.
He and his wife, Xu Huiying, who was said to have helped Han Liang and Zing Wei when they first returned to Shanghai in 1942, lived on in Shanghai until they were both well into their nineties. Because of their and their marriage's longevity, they were often invited to weddings to bring favor to the union.
Their eldest son, Songling, who has also passed away, was married twice and had a daughter, Cheng (澄), by his second wife. They live in Australia.

The other two sons remain active. #2 son Heling, who provided immeasurable help with this project, splits his time between Shanghai and Beijing, where for many years he was with the geology department of the Chinese Academy for Sciences. He and his first wife, Ma Zuoli (馬佐莉), had twin sons, Dapei (大培) and Xiaopei (小培), who live in Beijing. The twins married non-twin sisters Liang Ping (梁平) and Liang Li (梁麗) and both have sons born in 1986 who have gone on to study in the US and in Australia.

Note: Heling looks a lot like his father Han Yang/Ruiqing, so following the photos of the two over the years can be confusing!
Heling’s wife Zuoli (sometimes known as "Daisy") died of cancer in 1984, and he remarried. Heling keeps active writing calligraphy and also doing research into the family’s background in Xiamen.

​#3 son Junling has one son, Enpei (恩培), and continues to live in the family house on Dong Hua Fang, close to the Yuyuen Road house (which still stands). ​​Enpei has a daughter Xiao, born in 1990. 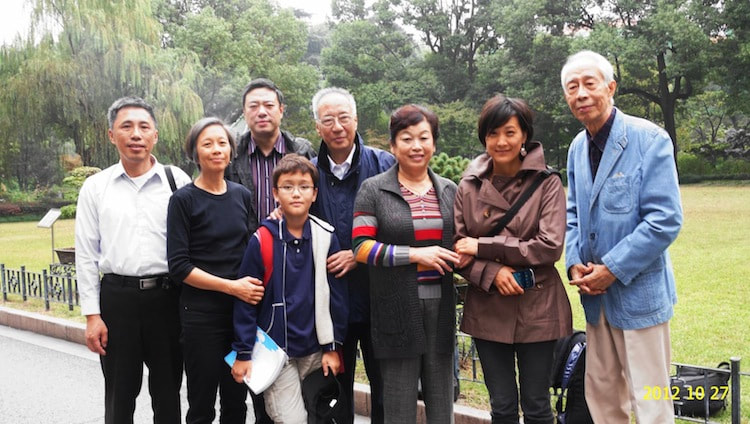 Me (2nd from left), my son and my cousin Heather with Heling (far right) and from left: Yuling, Enpei and his father Junling, Yuling's wife, Shanghai, 2012 (own photo)
HAN CHUNG THE BANKER – AND COUSIN WHO MARRIED A COUSIN
Han Liang and Zing Wei arranged for their cousins to marry. Han Chung, who was seven years Zing Wei's junior, married one of the cousins she grew up with, Sun Chun (孫純). It’s not known if Sun Chun attended Tsunghua Girls’ School like Zing Wei.

The younger cousins lived near the Huangs, on a lane off of Yuyuen Road. They had four children: sons Changling (昌齡), Yuling (與齡) and Renling (仁齡), and a daughter, Ciling (慈齡). After working for China Banking Corporation, Han Chung moved to yet another Hokkien venture, the Chiyu Bank (集友銀行 Jiyou Yinhang). It was founded in 1947 by Tan Kah Kee as a means to provide recurrent funding for Amoy's Jimei Schools, also founded by Tan. The Schools were for a long time the bank's largest shareholder. Han Chung's older brother, Han Yang/Ruiqing, had attended the Jimei Schools.
When Han Liang and his family fled China in 1948, many business matters were left in Han Chung's care. He faithfully carried out these duties, grateful for everything that Han Liang had done for him.

Unfortunately life's cruelties fell harder on him than on his older brother. During the Cultural Revolution, he suffered for his background as banker and quite likely his overseas family ties to Han Liang and Han Ho as well. He died in 1981 at the age of sixty-six. His wife lived on well into the 1980s (I was able to meet her once in 1985). Three of their children eventually moved to the US. Second son Yuling, who was settled in his job as a factory worker, remains in Shanghai. His wife's name is Su Yuqin (蘇玉琴), and they have a son and grandchild born in 2001.
SINGAPORE RETURNEE:  SHENPEI
Following longstanding Fukien tradition, Han Liang's cousin, Han Zhen, went to Singapore to make his living. He sent his son, Shenpei, back to Shanghai to be raised with his half-brothers, Han Yang and Han Chung. At some point, Shenpei left his uncles and joined his father in Singapore, returning again to Shanghai to attend college. This photo supposedly shows him with Han Chung during those college years. After he went back to Singapore, and China turned inward, contact with him was lost. 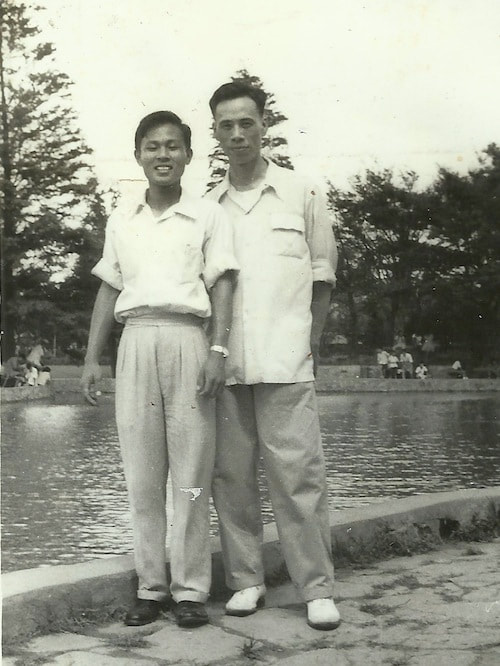 Shenpei and Han Chung
All photos on this page courtesy of H Huang, unless otherwise noted.