c. 1924-1927
We don’t know anything about Han Liang and Mo-li’s living arrangements immediately after their marriage in April 1924, but soon enough, if not right away, Han Liang commissioned a house at 1055 Yuyuen Road (愚園路 Yu Yuan Lu).
​
Yuyuen Road was a mile-long stretch of road to the west of Shanghai’s foreign-controlled International Settlement. It was close to the site marked "Jessfield" on the following map, meaning that Han Liang would have had to commute several miles due east to reach the Bund business district fronting the river.

From the 1932 "Géographie de la Chine" (author's own)
Yuyuen Road was also a similar distance from the Chapei area where Mo-li had lived with her family, but close to the McTyeire School that the How sisters had attended. In short, the distance did not appear to be an obstacle, and indeed moving through different national and cultural spheres, both literally and figuratively, was a normal part of daily life in Shanghai. 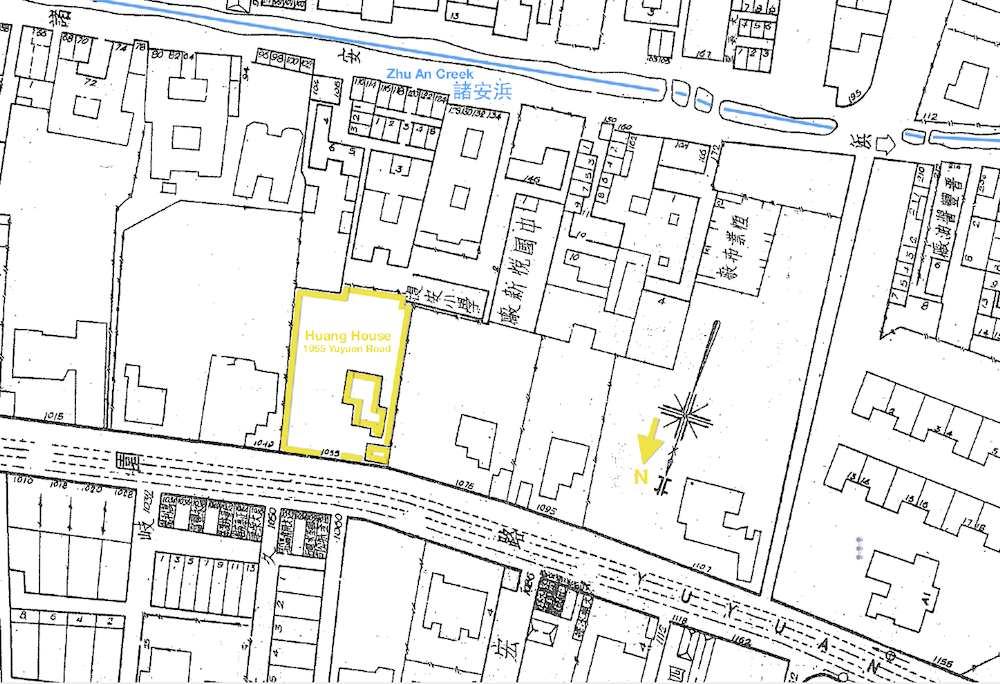 1945 map annotated to show the 1055 lot and house footprint, from 老上海拜谒指南 (Old Shanghai Complete Business Guide)
​
The area was emerging as a less expensive place for the well-to-do to build their western-style villas. Typical of the times, the three-story house had all the amenities: electricity, central heating, bathrooms with hot and cold running water, and a comfortable garden. Though ample by the standards of the day, it also did not pretend to be one of Shanghai’s fabled mansions. KP Chen of the Shanghai Commercial Bank lived in a similarly sized house immediately next door at #1075, and his house drew comment for being significantly more modest than what people expected for a banker of his stature.
​        Mo-li brought to the Yuyuen Road house a personal maid and a houseboy, called "Ah Bing" whose duties included waxing the floors and answering the telephone. He took pride in answering calls from non-Chinese speakers with a loud, “Way-ta-me-knee-plee.”

After the bustle of the How family home, with its columned facade, located on the Commercial Press’s vast compound in Chapei, north of Suzhou Creek, one wonders how Mo-li adjusted to her new life. It would be interesting to know how often Mo-li's sisters made the cross-town trek to see her, or whether she regularly returned to join How family gatherings.

​        The Ho Hong Bank clearly had an intention to open a Shanghai branch by 1925 if not earlier, and some accounts give 1925 as the opening year for such a branch. However, it seems that Han Liang was only officially transferred to Shanghai in 1926 and that full-fledged premises only opened in early 1927. Given his marriage in 1924 and the various bank dates on record – some say he was simultaneously manager of both Ho Hong's Shanghai and Hong Kong operations for a period of time, it seems likely that he spent a couple of years shuttling between the two cities. Perhaps he traveled periodically to bank headquarters in Singapore as well, though we do not know specifically of any such trips.

We assume that in the intervening months, Han Liang was kept busy hiring staff and scouting out premises. With a building boom in the commercial as well as residential sector, he should have had plenty of options. Along the Bund alone, something like half the buildings still extant today were built or rebuilt during the 1920s, including the enormous and iconic Hongkong & Shanghai Bank completed in 1923. The premises selected for the Ho Hong Bank were a compact, but elegant six-story masonry building at 120 Kiukiang Road (九江路120號), two streets back from the Bund. The street and vicinity housed many other banks. 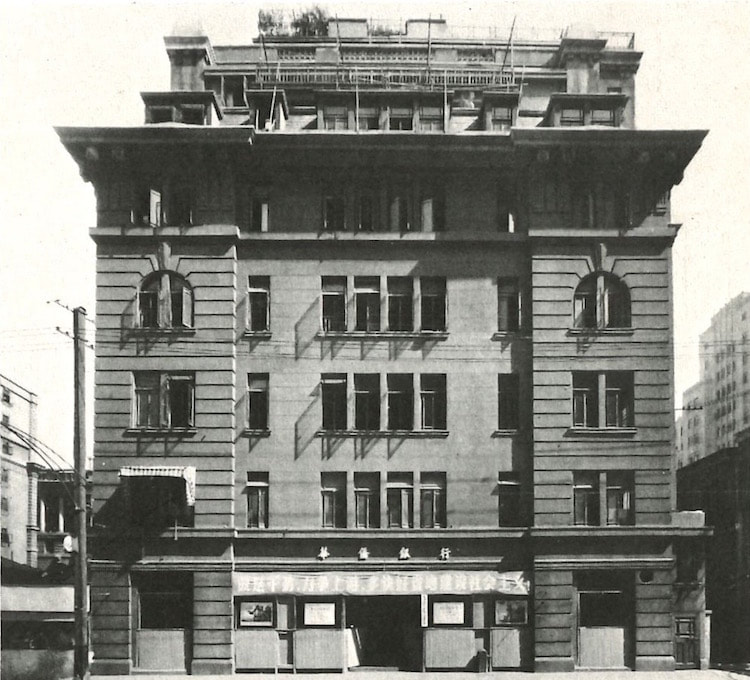 1950s photo of the former Ho Hong Bank building, with "華僑銀行" (Overseas Chinese Bank) and a banner promoting socialism seen above the door 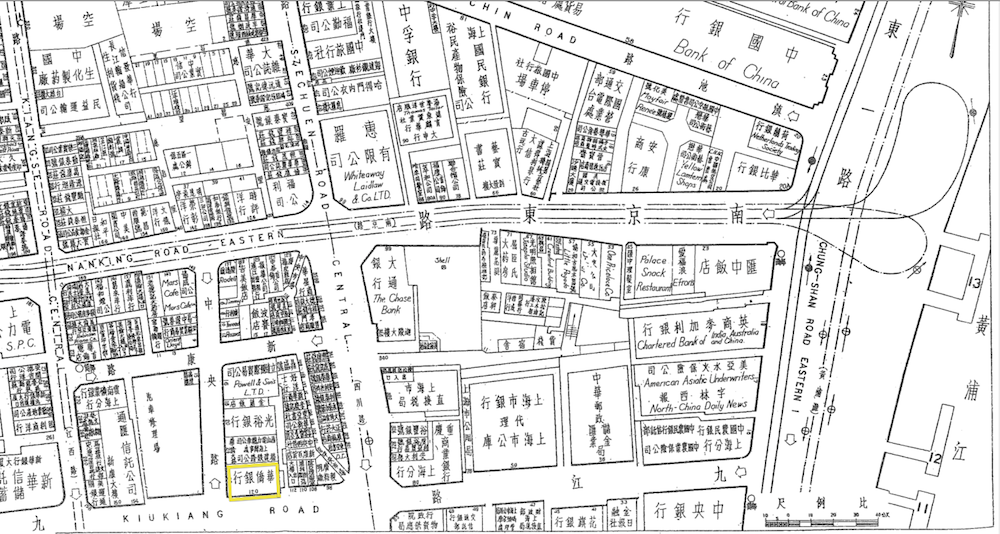 The Ho Hong Bank building (marked in yellow) on Kiukiang Road – one long block west of the Bund, and two short blocks south of Nanking Road, the main shopping boulevard (老上海百業指南)
​At some point, Ho Hong Bank became a member of the Shanghai Bankers Association, with Han Liang serving as one of the Association's directors. Data from 1925 provides a helpful indication of the relative power, or lack thereof, of the Ho Hong Bank within the Association: it and four other banks started mainly by overseas Chinese made up the so-called Kwangtung group (廣東 Guangdong) that ranked in second place with control of 9% of the Association’s resources. By contrast, the dominant Chekiang-Kiangsu group (浙江江蘇 Zhejiang-Jiangsu) comprised fourteen banks from Ningpo and the nearby region, as well as Anhui and Sichuan, and controlled 84% of the Association’s resources. Ningpo was another of the original treaty ports opened up by the British, and it had a deep bench of what were known as "native banks" (錢莊 qianzhuang).
If Han Liang encountered delays in setting up the new branch, it would be no surprise. These were years filled with dramatic events.

In January 1925 in Peking, Sun Yat-sen was diagnosed with liver cancer, and in March he died at the age of fifty-eight. Since 1922, he had steered the Kuomintang party (KMT) into an uneasy alliance with the Communist Party and its Russian backers, complicating the shades of left and right within the already divided KMT. Sun's death only worsened the country's power vacuum, with pitched battles taking place among China's dozen or more regional strongmen or "warlords" (軍閥 junfa). Within the KMT, the handsome and leftist Wang Ching-wei (汪精衛 Wang Jingwei) certainly had a claim to be Sun's successor, but it was one he was never able to decisively impose. Chiang Kai-shek, the young man who opened this narrative, would very soon emerge as a viable political leader. But at this point he was still just establishing a name for himself at the helm of the Whampoa Military Academy, opened in 1924 with Russian backing. 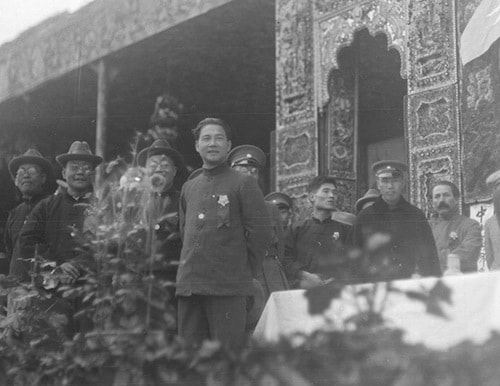 Wang Ching-wei at center, Chiang Kai-shek at right with hat, and Russian advisor Mikhail Borodin, 2nd KMT National Congress, 1926 (https://www.hpcbristol.net/visual/fu-n087)
Meanwhile, Shanghai as the country's industrial powerhouse was at the forefront of labor organization and unrest, especially as the Communist Party grew more active. In May 1925, a strike at a Shanghai textile mill turned violent. A worker was killed, sparking further strikes, student demonstrations and violence resulting in eleven deaths. The focus of the demonstrations was a police station on the main shopping boulevard, Nanking Road, only a few blocks away from the Ho Hong Bank's future site. The police force responsible for Shanghai's International Settlement was made up of Chinese and Sikh policemen headed by British officers. Strikes with a decidedly anti-foreign slant spread to other cities and even shut down Hong Kong for most of 1926.

If Han Liang was indeed continuing to oversee Hong Kong operations, at the same time as trying to open the bank's Shanghai office and also attend to his recent bride, he had his work cut out for him.
SOURCES