From 1952
While in Hong Kong, even after the ascendance of the Communists, Han Liang apparently continued to harbor hopes of returning to Shanghai as others he knew were doing. But Zing Wei was adamantly against the notion, and her view won out.

Before long, there was more upheaval, as the children left Hong Kong to follow in their father’s footsteps by attending school in the US. Passports were apparently bought for May and Peter, but Paul recalls being sent to Macau to arrange his own passport with Chinese authorities there.

May led the way, heading for Winthrop College in Rockhill, South Carolina – also known as the South Carolina College for Women. We don't know the exact year, so possibly her glamorous party, seen on the previous page, was also a farewell. She sailed aboard the President Cleveland, one of the premier ships of the American President Lines. The summer after her freshman year, she apparently caused a parental uproar when she undertook a cross-country road trip with several male classmates.
In March 1952, after sitting for the SATs, Peter was trundled off to Stanford, well shy of completing his senior year at KGV (the school ran on a calendar year). Paul went to Northfield-Mt. Hermon on the recommendation of the ABC Huang family. They each traveled on cargo ships.

Helen entered Dana Hall in the fall of 1952. Like her older sister, she traveled on another Presidential liner, the President Wilson. Her fellow passengers included diplomat Wellington Koo's stepdaughters – Genevieve, Shirley, and Frances Young – who were her age but far more savvy about the social graces of fashion and smoking.
Helen had already decided on a career in medicine and by the following year, she was accepted at Stanford. The university was willing to admit her at the age of fourteen, provided she could live at home with her parents.

And so it came about that Han Liang and Zing Wei prepared to move to the US.

Because of the US-China alliance during the war, the Chinese Exclusion Act of 1882 had finally been rescinded in 1943, but strict quotas admitting only 105 Chinese per year remained in place. This made it impossible for Stephen and Philip to be granted entry along with their parents. A plan was made to send them to Vancouver College. In the summer of 1953, the brothers set off by ship with their father. En route, they stopped in Yokohama, where CY Tung, who had started the Orient Overseas Line in 1947, noted in his diary that he entertained them and that Han Liang could hold his own on the dance floor (the published diaries misidentify Stephen and Philip as Peter and Paul). Eventually their ship landed in San Francisco, and in strict observation of border regulations, Stephen and Philip were escorted under armed guard to the train that would take them to their new Catholic school over the border.

At Vancouver College, Philip entered 9th grade, while Stephen was in 7th. Han Liang apparently neglected to replenish their pocket money and the two remember forlornly splitting a hamburger for Christmas dinner in 1953. In 1954, they would follow the rest of the family to the US, finishing up at Palo Alto High School.

May transferred to Mills College and spent her junior year at USC. Later she would change her name to Veronica – presumably inspired by Veronica of the Archie comics, adopt the nickname “Roni”, and take courses at the Parsons School of Design. Peter went on to their father's alma mater, Columbia, to attend business school. Paul started college at Swarthmore, graduated from Grinnell College, and then earned a Master's degree in Economics at the University of Chicago. Helen finished medical school at Loma Linda. Stephen graduated from the University of the Pacific. Philip followed in their father's footsteps in attending Princeton and continuing on to get his PhD, in this case at the University of Washington. 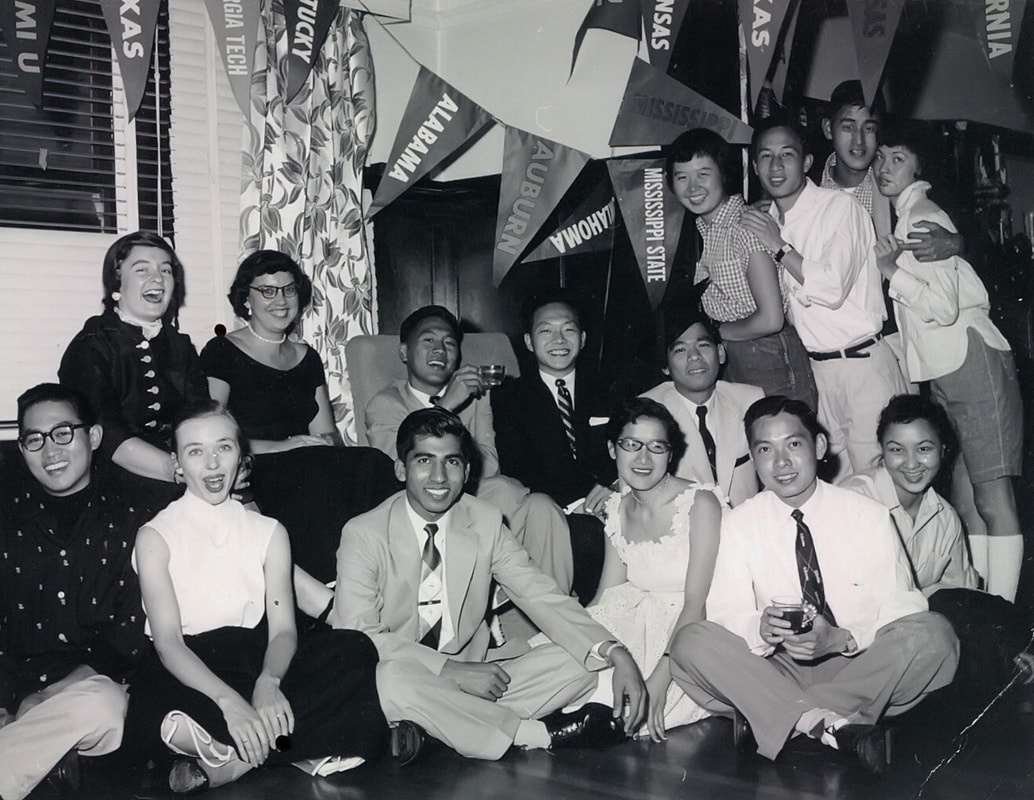 Peter standing far right, literally "embracing" collegiate life, with May seated far right – around this time she adopted the name "Roni", short for "Veronica", one of the characters in the popular Archie comics; Peter's squeeze is Winnie Wong, whose sisters used to swim with the Huangs in Hong Kong
Han Liang and Zing Wei wanted to be close to Stanford where Helen would be enrolled. They chose a house in Palo Alto at 972 Hamilton Avenue. Zing Wei’s photo albums show that "972" became a base for a steady stream of visitors and the front door a favorite backdrop. Many correspondents who considered her “auntie” sent their own photos which were stashed with the Huang family photos. 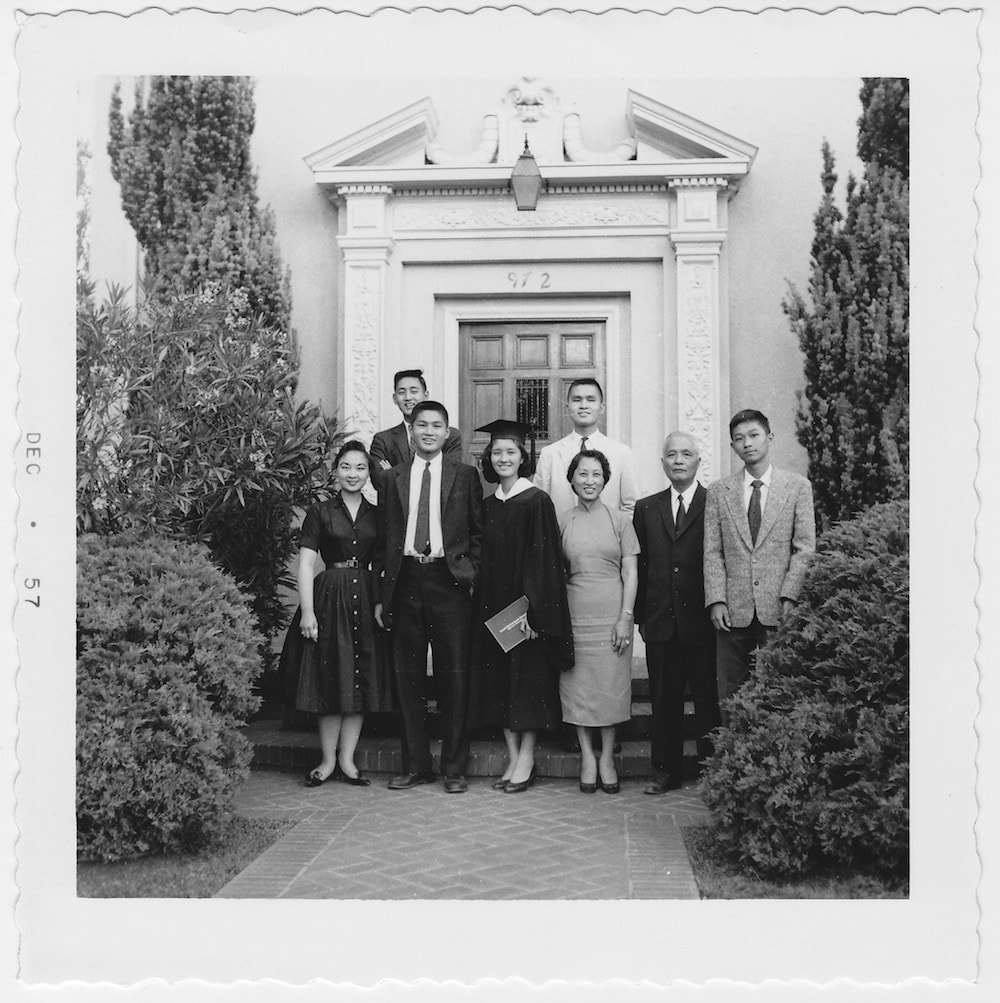