Wuxi, c. 1908
Zing Wei was born on January 18, 1908 to Tang Xiqi (唐錫圻, 1886-c. 1917) and Sun Jingmei (孫景梅, c. 1887-c.1914) near Wuxi (無錫) in the village of Xizhang (西漳), about four miles from the market town of Shi Tang Wan (石塘灣) and about seven miles north of the Wuxi city center. Notably, that was the same year that the Nanking-Shanghai Railway was completed. It ran right past Shi Tang Wan, paralleling the Grand Canal which once upon a time had been China's great transportation artery. That rail line would ensure that Wuxi's prospects rose in tandem with those of Shanghai.

Broadly speaking, Wuxi is situated at the epicenter of Chinese silk production. But with a microclimate far less suited to silkworm rearing than nearby Suzhou, Wuxi only became a silk center from the 1860s following the ravages of the Taiping Civil War. During that fifteen-year convulsion, when a Chinese peasant who called himself a successor to Jesus enthroned himself in Nanking, half or more of the region’s population died or fled. But Wuxi’s land was fertile and the area was quickly resettled in the late 19th century. Much like nearby Suzhou, famed for its cultural achievements and beautiful women, Wuxi was intersected by canals and waterways. 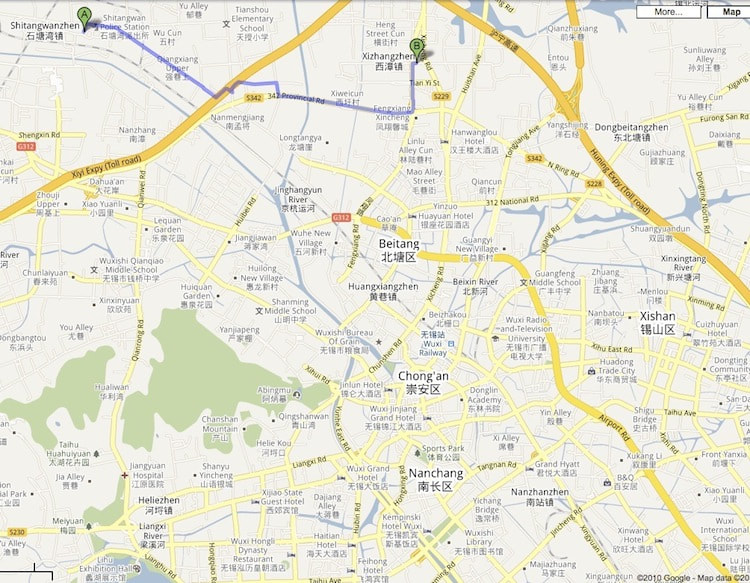 A modern map shows Zing Wei's village (B) about four miles from the nearest market town (A), which was right next to both the Grand Canal and Nanking-Shanghai rail line. Lake Tai is just visible in the lower left corner.
In one of her letters, Zing Wei calls her family poor. But in her full narrative, Zing Wei stakes a claim to a measure of gentility that seems to be borne out both by her later schooling and by a Tang family genealogy published in 1899. Thirteen at the time, her father was just old enough to be included. The genealogy traces the Tang family back more than forty generations and notes Zing Wei's great-grandfather, Tang Shiyi (唐士伊), to have been a classical scholar with a connection or aspiration to Peking's Hanlin Academy (翰林院 Hanlin Xueyuan). Born in 1833, Tang Shiyi would have been of age for a plum posting at exactly the time of the Taiping conflict, and so perhaps in those troubles lay the seeds of the family's decline. ​ 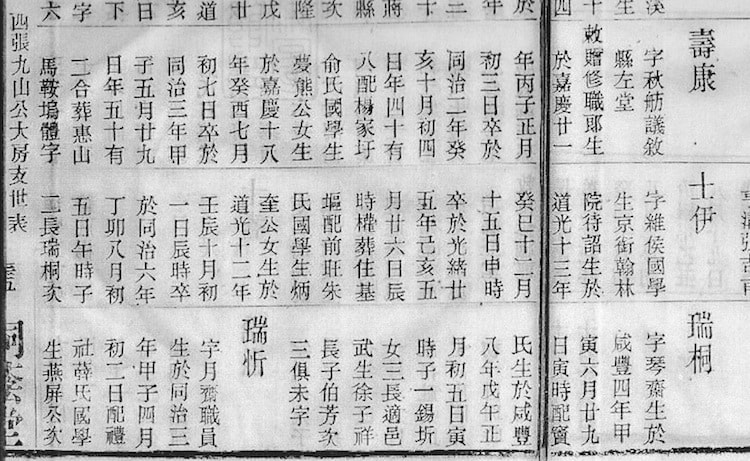 The genealogy entry for Zing Wei's great grandfather Shiyi (士伊) appears in the second row and for her grandfather Ruitong (瑞桐) in the third
That Zing Wei's family would have become involved in the silk business is no surprise given that so many Wuxi families of the post-Taiping period, genteel or humble, were connected to the production of that long-prized material. The Wuxi of Zing Wei's childhood was also beginning to present new opportunities.

In the 1860s and 70s, Shanghai imported its first silk-reeling machines from Europe, where silk production was in decline. Before long, mechanized “filatures” became one of the main industries of Shanghai's Chapei district (閘北區 Zhabei Qu), creating an unprecedented demand for silkworm cocoons which Wuxi helped to meet.
At the bottom of the heap were peasant families with tiny plots who supplemented rice and wheat farming with cottage efforts. Those growing their own mulberry trees allocated their women to the laborious and seasonal tending of voracious but fussy silkworms. At peak times, care was required around the clock.

At the top of the heap would have been Wuxi’s Zhou family that made its fortune as a “comprador” or trade agent for a British company in Shanghai, then returned with enough knowledge of the silk business to start the city’s first filature in 1904...or the Xue family that attained exam honors and the highest echelons of the Qing diplomatic court and later set up cocoon firms supplying Italian filatures. Slightly less lofty at the time would have been the local Yung (榮 Rong) family. Still prominent today, they parlayed a modest landholding and some experience in banking into an initial silk venture and, eventually, into a cotton and flour milling fortune.

The story of another early Wuxi filature founder, Sun Heqing (孫鶴卿), is illustrative of the times. A major landowner in Shi Tang Wan, who eventually helped bring electric street lights to Wuxi, he may have been at least a distant relative of Zing Wei's mother, who was also surnamed Sun. With land in a new industrial zone as collateral and a loan from Wuxi’s first modern bank, in the year after Zing Wei’s birth, Sun Heqing began to build the Ganshen filature (乾甡絲廠 Ganshen Sichang). It opened in 1910. Men from elite families like his own filled key positions. Results were unimpressive until an industrious young nephew with a modern education, who had worked as an English teacher at a women’s college, joined the business in 1914. Over time, the nephew completely took over management of the business. By the 1920s Wuxi had nearly twenty such filatures, and by the 1930s over forty. 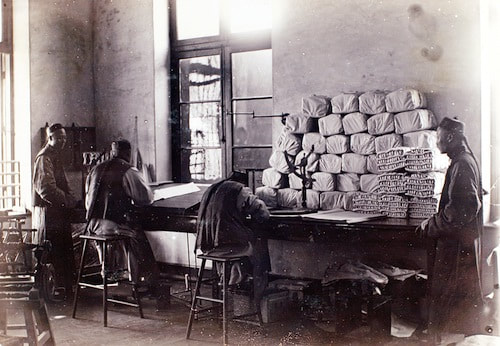 Unknown silk warehouse in Shanghai, c. 1900 (https://www.hpcbristol.net/visual/hy01-35)
​       Young women and children without options flocked to these Wuxi filatures or even further afield to Shanghai. There were not only silk factories and cotton mills, but also less sophisticated factories requiring labor to produce such items as matchboxes, safety pins, wrapped candy or packed eggs. Zing Wei’s path suggests that her family was above the common fray. Even if not as capable as the Ganshen nephew, her father could have served the filature of his maternal aunt’s family, also surnamed Sun, in a number of emerging “white collar” roles – perhaps as a clerk or a junior manager sourcing cocoons from ordinary, subsistence-level households. 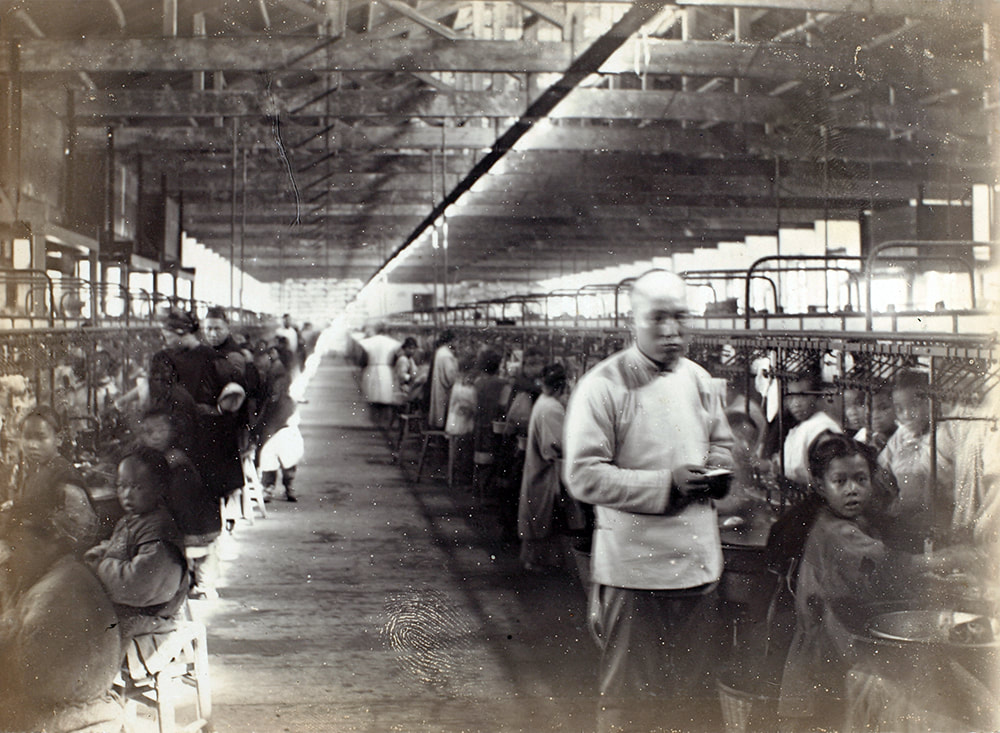 Silk filature in Shanghai, c. 1900, suggests what Zing Wei's fate might have been had she not come from a family able to send her to school (https://www.hpcbristol.net/visual/hy01-45)
Whatever the case, better-than-average circumstances would not necessarily look pretty to the contemporary eye. One of her sons visited the village in the late 1970s or early 1980s and saw houses with bare earth floors and livestock running about. Better-than-average circumstances also provided no guarantees against the vagaries of illness. Zing Wei was left an orphan after first her mother died and then, three years later, her father – one apparently of typhoid and the other of meningitis. She is believed to have been about nine years old.

Zing Wei related that, after her mother died, she had a stepmother who made an effort to bind her feet – a practice that was beginning to be given up as backward, but that in many parts of China would still have been considered proper and important for a woman’s marriage prospects. This stepmother eventually gave up because it made Zing Wei so miserable.

After her father’s death, Zing Wei went to live with maternal relatives surnamed Sun – possibly her mother’s older brother (舅父 jiufu), with whom she is known to have corresponded. It's believed that the family had three daughters and that Zing Wei was particularly close to the youngest, Sun Chun (孫純). Later in life she would be that cousin's matchmaker. Still, even a progressive family must have found an extra daughter something of a burden. But somehow provision was made for Zing Wei to continue her education.
SILK REELING
SOURCES