The Ministry of Railways & Finance, 1930-1932
In 1930, amid the complexities of his domestic life, Han Liang stepped for the first time into public service. Nominally, this change would propel him to the pinnacle of his career – banker turned government minister. But he would also face impossible challenges and probably the darkest hour of his professional life. In the end, he would never go back to banking.

​Years later, shipping magnate CY Tung (董兆榮 Dong Zhaorong, aka 董浩雲 Dong Haoyun, 1912-1982), when describing his first meeting with Han Liang, noted that he had served in “the shortest administration in history”. Even by the standards of the tumultuous Republican period, Han Liang’s twenty-five days in office were notably brief.​
Although at many points over the years at odds with Chiang, in 1928 Han Liang's old friend Sun Fo assumed several positions in the Nanking government, including that of Minister of Railways. It was a portfolio of strategic importance, but one that must have held additional significance because it had been a particular obsession of his father. Sun Yat-sen viewed an extensive rail network as so critical to the country's progress that when he abdicated in favor of Yuan Shikai in 1912, he asked to be put in charge of railways. The younger Sun now brought Han Liang on as his deputy, with a remit to secure foreign funding for expansion.

Han Liang resigned from Ho Hong Bank (his former trainee, Tan Ee-leong, succeeded him on an interim basis). It was a major step. While later there would be suggestions that Han Liang joined Sun Fo only out of friendship, perhaps at this stage he was more wholehearted than ambivalent. He formally took office on October 29, 1930. But there is some indication that he may already have been playing some kind of consultative role, in which case, he should have been clear-eyed about what he was getting into.

​In many ways the new position seems like it would have suited Han Liang well. As Deputy Minister, he made an inspection tour of the university responsible for turning out railway technicians (a forerunner to Xi'an's Jiaotong University, 交通大學) and also served on a new British-Chinese Boxer Indemnity commission. Although the US had decided decades before to return its reparation monies in the form of the scholarships which had sent Han Liang to the US, the British were only just finalizing their arrangements. They chose to redirect their indemnity funds as loans for railroad construction and water control projects. 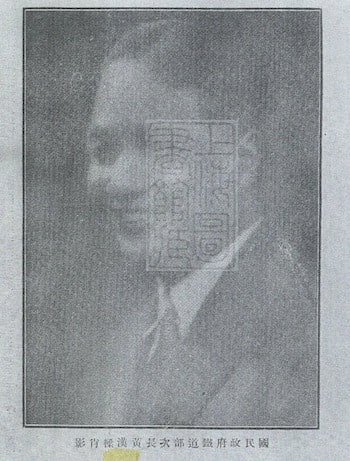 "Photograph of Huang Han Liang, Deputy Minister, Ministry of Railways, Nationalist Government"
Not long after Han Liang's move, Chiang's government found itself in an authority crisis. Indeed, KMT factional fighting threatened to turn into civil war. A modicum of compromise was only achieved when on September 18, 1931, Japan precipitated a military encounter in China’s northeast – the Mukden Incident – and used it as an excuse to invade Manchuria.
​
This de facto declaration of war had been brewing for many years. Public opinion was in favor of counter-attack. Chiang favored appeasement of the Japanese to buy China more time to build up its powers of resistance. The Nationalist army was after all basically a coalition army, and now it was often in combat with its Communist rivals. Chiang's challengers within the KMT had no qualms about taking advantage of this public and internal dissent. ​ Among their complaints was his dictatorial and opaque style of government 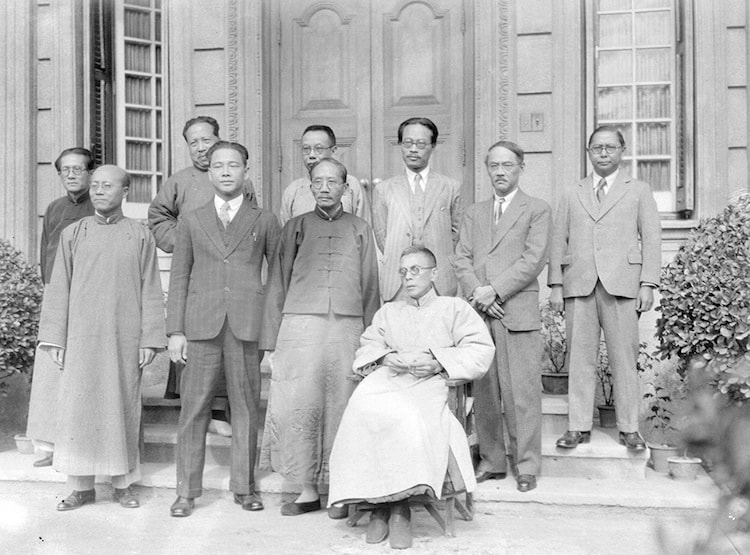 Sun Fo is at the far right of this undated photo with other KMT heavies. Front row: Wu Chaoshu (Foreign Minister, 1927-28), Wang Ching-wei (Chiang's leftist rival), Tsai Yuan-pei (educator and early KMT party elder), and Zhang Renjie (early Chiang backer and another party elder) (https://www.hpcbristol.net, image #fu-n011)
Chiang resigned from office, taking a gamble that there would soon be calls for his return. It was a strategy that he had tried once before in 1927 and that had served him well.

In the breach, Sun Fo, who was part of the KMT's Guangdong faction, was named as premier. As had been anticipated back in their student days at Columbia, during the years that Han Liang had built a banking career, Sun built a political career as part of his father’s Kuomintang party. He performed well as the first mayor of Canton (Guangzhou 廣州) and in other roles, and became a significant but never preeminent player. In cobbling together a cabinet, he turned to Han Liang to serve as Minister of Finance.

It was now December 1931. Their extremely brief time in office is well documented, allowing us to follow the action almost day-by-day.
SOURCES