c. 1924-c. 1929
And what of Han Liang’s brother, Han Ho? After a brief stint in Shanghai in the mining industry, which had been his field of study in the US, Han Ho returned to Amoy. There he married Peggy Chiu (周碧玉 Zhou Biyu) and found work at the newly established University of Amoy (廈門大學 Xiamen Daxue). University records show that Han Ho served as an associate professor of engineering in 1924-25 and as interim head of math in 1926. ​ 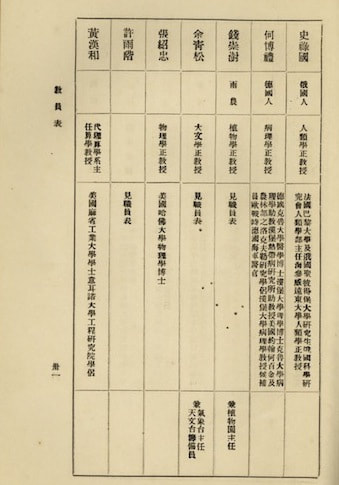 Han Ho is listed in the far left column of this faculty roster, with his MIT and Illinois credentials (courtesy of Xiamen University)
​        The university was located on Amoy Island, but Han Ho and his family lived on Kulangsu, where it’s believed Han Ho and Han Liang spent some or all of their childhood. After so many years, Yu Koon was again living with at least one of her sons. We can only guess if it was Han Ho's idea to move back to Amoy, or perhaps that of Han Liang or their mother.

​        Whatever the reason for the move, Yu Koon must have been thrilled when her first grandchild was born. In 1924, Han Ho and Peggy gave birth to a son. He was given the Christian name Moses (柏齡 Bailing) after an older half-brother of Peggy's. Two years later, they had a daughter Mary (楓齡 Fengling), born on June 15, 1926. ​It was said that Mary was a big baby and the birth was difficult. 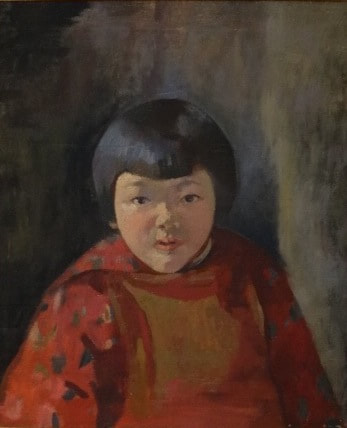 Mary as painted by her maternal 7th Uncle (courtesy M Gee)
The story of the new university that employed Han Ho and the story of Peggy's own family offer further vignettes of Amoy’s overseas  linkages – as does the story behind this painting.
During Han Ho’s years in Amoy, the University of Amoy was a new institution determined to make a splash. In 1926, acclaimed scholars Lu Hsun and Lin Yutang (林語堂) both taught there briefly – the most prominent examples of the high caliber of intellectual that the university’s charismatic founder – Tan Kah Kee  (陳嘉庚 Chen Jiageng, 1874-1961) – ​sought to attract. Lu Hsun was a radical doctor-turned-writer who had been at the forefront of the May 4th New Culture movement. Noted for his "Diary of a Madman" (狂人日記 "Kuang Ren Ri Ji"),  "The True Story of Ah Q" (啊Q正傳 "A Q Zheng Zhuan"), and other stories, he was in fact in flight from Peking, where two of his students had been killed in demonstrations protesting the misdeeds of a northern warlord. Lin Yutang was then more of an academic than acclaimed writer, but he would later be known as an internationalist, who wrote equally well in Chinese and English, with a gift for explaining Chinese culture to Westerners. He would in future be pipped by Pearl Buck for the Nobel Prize for Literature.

​In fine Fukienese tradition, Tan Kah Kee had followed his father to Singapore, joined his rice business, and then built his own fortune in the rubber trade. A committed philanthropist, he had earlier started a cluster of schools called the Jimei Village Schools which Han Liang's cousin Han Yang had attended.

That both Huang brothers were known in later years to be friendly with Lin Yutang may have had as much to do with Peggy's background, as with Han Ho's position at the university or broadly shared Fukien ties. Hailing from  a remote mountainous part of the province, Lin's family were early Christian converts – he would discuss his rejection of and subsequent return to the church in books titled Why I Am a Pagan and From Pagan to Christian. So were Peggy's father and uncle. While she is believed to have grown up in Amoy, it's possible that her father and uncle originated from a more remote part of Fukien like Lin's family. 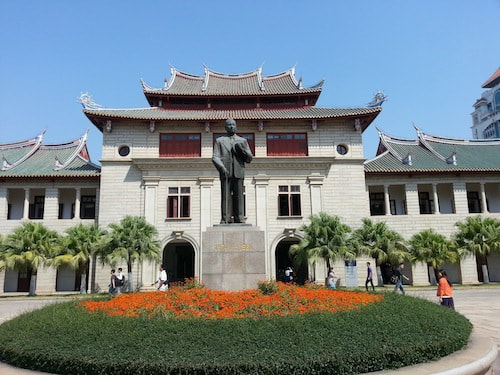 Statue of Tan Kah Kee outside of Amoy University main building (author's photo, 2012)
Peggy was one of twelve siblings (born to two mothers), who garnered their own distinguished international credentials. Eldest half-brother Moses Chiu (周慕西 Zhou Muxi, 1879-1914) went to England and Germany to study Hebrew, Latin and Greek and became the first Chinese student to receive a doctorate from the University of Berlin. His achievements earned him the equivalent of a knighthood from President Yuan Shikai. Peggy lived in England with him, then after an older sister married a Dane surnamed Kring, she finished her schooling in Denmark to help keep her sister company. Eventually Peggy and her sister moved back to China because the sister was homesick. After the sister died, the Dane surnamed Kring came to fetch their daughter who is believed to have been named Helga or Hilda.

Among Peggy’s other siblings was her number seven brother, who studied painting in France. He made the painting of Mary, pictured above. Apparently, Mary's portrait was a minor work undertaken as a distraction while he painted a full-length portrait of the Mary's grandmother Yu Koon. At least in the painting, her clothing was more elaborate than that of her younger sister-in-law Lin Yiguan (see previous page), with decorative borders on her tunic and trousers and a matching headband. The painting hung for many years in the home of Han Ho and Peggy, but is lost to us now.

​Mary recalls that her family lived in a traditional house, because its high thresholds caused her to trip as a toddler, badly scarring her nose. Apart from this minor childhood accident, Amoy life seems like it would have been a genial and gentle life, not without its cosmopolitan moments, though nothing like the hustle and bustle of Shanghai where they would move in about 1929.
Banner caption: a Kulangsu house, 2012 (own photo)